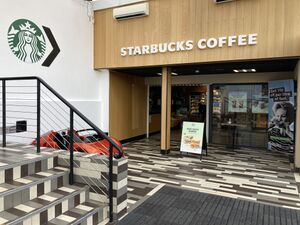 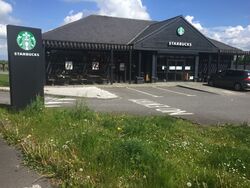 The old joke that there's a Starbucks on every corner in London may not be quite true, but they've got a pretty good coverage by the side of the road.

Starbucks is one of the world's most famous high street brands, striking a balance between a premium image and being popular. However by the time Starbucks was introduced to the motorway network, the industry was already dominated by Costa.

Starbucks are known for their high brand standards. They like to be kept far away from the other food brands, and ideally they like to have a whole building devoted to their brand. This means you won't find a full Starbucks menu integrated into a restaurant, and in a food court you'll usually find Starbucks with a whole corner to itself.

The prices charged at Starbucks are set by the franchisee, and on the motorway these tend to be heavily inflated. The fact people continue to pay may explain why so many drive thru coffee shops have opened up near the motorways.

All Welcome Break sites include a Starbucks, and these used to be open 24 hours, until the COVID-19 lockdown. These are operated under a licence recently extended until 2030.

Starbucks was introduced, under licence by Welcome Break to Corley in May 2006, where it was trialled alongside Coffee Primo. The result was not overwhelming and motorway users were given the impression that this was as far as the trial would go.

The Corley site didn't close though, and in 2009 Welcome Break opened a new Starbucks at Warwick southbound, followed shortly by an announcement that it would be rolled out nationwide. This was partly because using Starbucks allowed Welcome Break to access all their product development without any additional work, and also because demand had increased and Welcome Break now reckoned Starbucks was increasing sales by between 20% and 40%. Each service area gained several Starbucks, usually operating from small stands.

Around the same time, all of Extra's newest services opened with a Starbucks.

Starbucks then became a Euro Garages partner. As Euro Garages became more successful, Starbucks spread further, especially on the A-roads. Many former Little Chefs had so far become Costas, but with Euro Garages on board they would now become Starbucks instead.

In January 2017, Euro Garages purchased Little Chef with the intention of replacing most of them with Starbucks. This worked for the smaller buildings, but Starbucks had reservations about sharing the larger buildings with other food brands which ultimately led to them not being included in those sites.

In August 2012, Welcome Break opened two drive thru Starbucks units, utilising former buildings at Fleet and Membury. At the time they were the only drive thrus on the motorway network, and one of few examples of Starbucks drive thrus in the UK.

Owing to their popularity more have since been built, with purpose-built glass restaurants springing out on spare land owned by Welcome Break's car parks.

Starbucks on the Go

During mid 2018, Welcome Break started introducing Starbucks on the Go machines to some of their sites to replace Costa Express.

Starbucks operate at most Welcome Break and Extra motorway services. They are: [view on a map -  Download KMLrefine search] 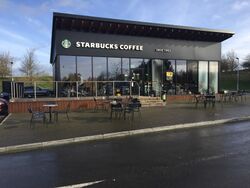 A Starbucks drive thru.

Starbucks On The Go Locations

Starbucks On The Go machines can be found in the following locations:

Starbucks has been removed from the following services: