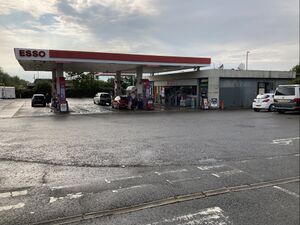 Not to be confused with the smaller Eye services on the A15, this is Eye Green, just north of a roundabout at Eye.

Although the approach signs state that HGVs are banned from the services, the filling station does have HGV pumps. 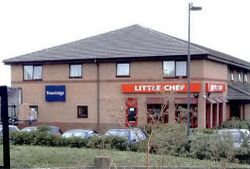 The Little Chef occupied a small corner of the hotel.

Plans for a service station here first started in 1989, before the Eye Bypass was built, with a petrol station, hotel and restaurant planned to be built next to the existing council depot. It was designed by London Brick Property Limited and planning permission was refused.

An Esso filling station and McDonald's were built, and opened in 1996, with a hotel planned to open separately.

A Travelodge and integrated Little ChefHistory were built in 2001. Originally the 36-seat restaurant would have been at the back of the building, but it was moved to the side. It was one of the last Little Chefs to open; a tiny restaurant provided for the benefit of the hotel.

At the time, Travelodge and Little Chef were two faces of the same company, so sharing the building made a lot of sense. It became more complicated when Travelodge sold Little Chef, but Little Chef continued to lease the space from their former colleagues. The restaurant even withstood competition from the McDonald's next door for a long time.

For a short while it became a Little Chef Choices site, meaning the menu offered Caffè Ritazza and Harry Ramsden's too. When EG Group acquired all the Little Chefs in early 2017, seeking to turn them all into coffee shops, Eye Green was a quick and easy branch that was soon converted into a Starbucks.

The filling station previously included a Snack & Shop store. In 2014, it was acquired by Euro Garages who rebranded the store to SPAR and added a Subway store inside. EG Group added a Greggs store in an extension to the sales building on 15 August 2017