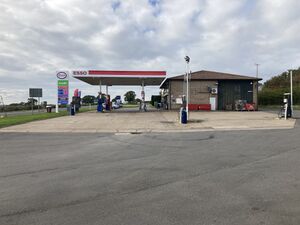 A47 between Uppingham and Peterborough

The single carriageway A47 finds time for a formal service area as it passes Morcott. 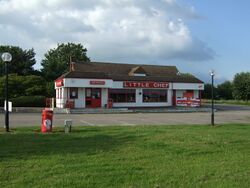 A service station here was first developed in the early 1970s and opened with the Morcott branch of Little ChefHistory and a Texaco filling station. There were plans to add 20 'motel units' for overnight accommodation in 1985. This didn't happen, but a 40-bed Travelodge later joined the site in 1989.

The filling station was purchased by MPK Garages in 1990, who operated the site under Total and Esso branding.

The Little Chef was one of a number of branches which closed in September 2012, after it was classed as under-performing. Following the departure of the Little Chef, the Travelodge closed in July 2014, but the building was purchased by Redwings Lodge who operate it as their Rutland branch.

The former Little Chef building was later purchased by an independent owner in 2015 who refurbished the restaurant, reopening as the Country Lodge. At this point, the filling station had been acquired by MFG and was trading under the 'low price fuels' banner with a Costcutter store. The restaurant was later extended in 2016 to add en-suite accommodation.

MFG added Murco branding as well as a Londis store in 2018. The restaurant, bar and en-suite accommodation were also sold to a new owner in the same year and was renamed to Rutland Point in 2020. MFG later rebranded the site to Esso in June 2022.

Redwings Lodge are now looking at adding additional parking at the back of the lodge. Meanwhile, MFG intend to add 4 electric vehicle charging bays to their forecourt. Rutland Point had also looked at adding a hairdressing salon to the ground floor of their property, but this was refused planning permission.