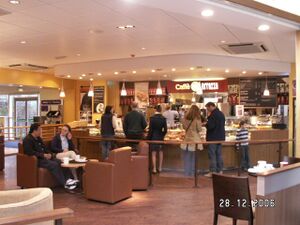 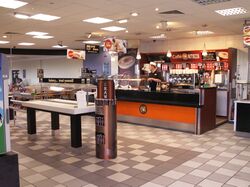 In the 2000s, service stations began to move their focus towards selling coffee and snacks.

When Granada was taken over by Compass and became Moto, Compass wanted to introduce several of the SSP brands they owned, to make the service areas more lively. This meant Caffè Ritazza became a common sight at Moto-owned properties.

Moto's main restaurant, Fresh Express, had stands inspired by several of their partner brands. At most services, this meant there was a counter serving Ritazza's coffee and drinks within the main restaurant.

Some services also had large Caffè Ritazza lounges, with what we would now consider to be contemporary coffee shop seating. It was placed by the entrance as a takeaway offer where space allowed. Moto also introduced it to their facilities in Dover Port, and to their Italian sister company Moto SpA. Their French service area had it too.

Before its success as a Moto brand, in 2001 Caffè Ritazza was recruited as one of the Little Chef Choices. This saw Caffè Ritazza and sister brands such as Harry Ramsden's and Upper Crust introduced to about 30 Little Chef restaurants. These closed in 2003.

Moto registered the name Baristo Coffee Rush in 2005. It's not clear if this was ever used.

Compass sold Moto in 2006, and then in 2008 Moto phased out Fresh Express. At the same time, they introduced Costa to their services, which either replaced Caffè Ritazza or, where space was available, worked alongside it. All the remaining Ritazza outlets were eventually removed in 2009, and the French aire closed at the same time.

Caffè Ritazza don't operate at any services in the UK any more, but can still be found at airports and railway stations.

Caffè Ritazza used to be found at the following Moto and Little Chef services: