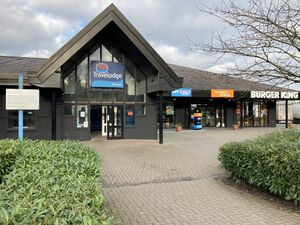 A huge building considering what few facilities it offers, Bangor is a bit of a relic in a far corner of Wales. 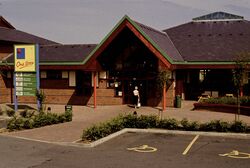 Top Rank had been looking at options on trunk roads, and saw this as an opportunity to build one of their smaller buildings, while providing one of the biggest facilities in the region. They opened it under their smaller name, One Stop.

It had one corridor running through the middle with a shop on the left, and a restaurant on the right. The hotel joins the main building on the left. Until 2017, the amenity building was still partly painted in its original green, and green signs can be found all around it. The building is now painted in Travelodge's corporate blue.

Top Rank became Pavilion and in 1994 Pavilion sold this site to Forte, as they needed money and would rather focus on motorways. Pavilion wanted £750,000 for the site, although it's not thought that they got this.

Forte changed the restaurant to become a large Little ChefHistory, changed the shop to a Little Chef Shop and changed the hotel to a Forte Travelodge. As Little Chef was then passed through various owners, it gained a Coffee Stop, Café Nescafe, Burger King, Coffee Tempo! and a Little Chef Express. For a time, it was a Little Chef Choices site with Caffè Ritazza and Harry Ramsden's menus.

The main sign at the front of the building promoted it as a Little Chef, alongside the other brand logos and large 'Bangor' lettering. Unusually, the Travelodge logo was written on a red sign. This was changed to blue with their 2005 rebrand.

Euro Garages bought the petrol station in March 2015 and planned to redevelop the forecourt, branding it BP with a SPAR store, a Starbucks on the Go machine, Subway and Greggs stores and a separate Starbucks drive thru that was positioned across the forecourt on the large vehicle parking area. This was planned to be completed by the end of 2016, but was put on hold due to planning issues. A Subway store was instead added to the existing sales building, opening in April 2017.

The filling station refurbishment was eventually completed in June 2018. It opened with Esso branding and the expected units. The Starbucks Drive Thru opened on 3 August 2018.

EG Group eventually refurbished the main building in summer 2019, relocating the main entrance to their facilities away from the Travelodge reception area. The Burger King restaurant was moved to the old Little Chef area, where a new drive thru lane was built. A Sainsbury's On the go store was placed in the old Burger King unit, and the old Little Chef Express area was partitioned off. EG Group closed their Sainsbury's On the go stores in 2021, leaving the unit empty.

In the forecourt, the SPAR store was briefly rebranded to Sainsbury's On the go, before changing back. It changed again to ASDA On the Move in September 2022.