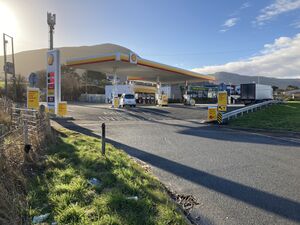 An old service station nestled in the foot of the mountains around Conwy. 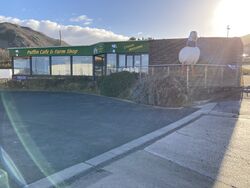 Although the service area's parking is provided for customers using the facilities only, it would be remiss of us not to point out that this service area is unique in that it is connected by a footbridge to the beach. This does at least mean that the facilities can boast that they are the only service area in the UK to be directly accessible by sea.

The service station at Penmaenmawr started out as a garage on the old Conway Road. In 1965 this gained a property on the seafront called Rosecroft, which later became Orme View Bungalow.

Around the same time, the Penmaenmawr branch of Little ChefHistory opened here, making it one of the country's oldest. It was a simple, short building which managed to trade until 2007, when it closed. It had stone-effect cladding and red and white stripes above the windows. In 2002, planning permission for a Travelodge to join the Little Chef here was approved, but this was never added.

The A55 here was upgraded to dual carriageway in 1989 to become part of the North Wales Expressway, significantly changing the view here. A long bus bay was built outside the services which allowed passing coaches heading further into north-west Wales to stop here. This was removed in late 2015, as was the lay-by on the other side of the road, but as of 2022 they are both showing as 'Little Chef bus stop' in NaPTAN.

The former restaurant building received a significant extension with more locally-appropriate cladding in 2014 and became The Puffin Cafe, Deli and Farm Shop. Orme View Bungalow was demolished at the same time. This closed during 2016 due to concerns about roadworks, but it reopened in June 2017. A Revolution Laundry machine was later added to the car park in 2018.

The Puffin Café soldiered on for another two years, before finally closing for good in November 2019. The self service launderette was also removed.