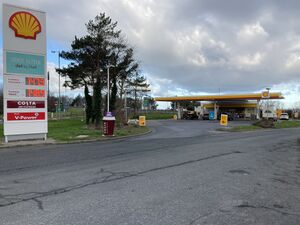 A low-roofed restaurant and petrol station nestled next to the slip roads of the Llanddulas exit on the A55. 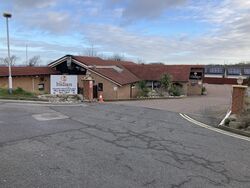 The service station opened in late 1987, with a Happy Eater restaurant (known as their Colwyn Bay branch) and a Shell filling station.

The restaurant became a Little Chef in 1996, where it gained a Burger King.

The Little Chef closed in around 2005 and went onto become Fifty 5 Diner. It then became Oinky's in the early 2010s before that closed in 2015. There were plans to replace it with housing, but instead it re-opened as an independent restaurant with a name that's a nod to its history; 'Little Indian Chef'.

The owner of the restaurant planned to build a second restaurant on unused land between the car park and Abergele Road. Permission was granted for this in 2018 but then the owner changed the plans to a combined hotel and restaurant complex, which was intended to carry a big brand name, but this plan has been rejected several times by the local council due to the proximity the hotel will be to residential properties.

The Shell forecourt has remained mostly unchanged since opening. The sales building was extended in September 2022 to add improved toilet facilities to the site.