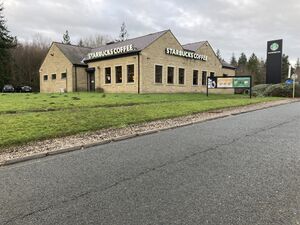 A pair of coffee shops in the woodland by the North Wales Expressway. 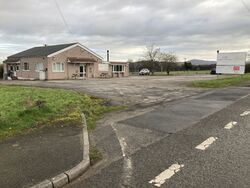 The original Bodelwyddan Little Chef on the old A55.

There was a branch of Little Chef at Bodelwyddan, on the original route of the A55, which opened in the 1970s and closed when the new road opened in 1988. The building went onto become Spice of India and more recently offered café facilities for the adjacent Kinmel Park Golf Centre.

The new Kinmel Park services opened at the same time as the new A55 in 1988, and were named after Kinmel Park Wood. Both sites opened with an Esso filling station and Little Chef restaurant on either side of the new dual carriageway. Both restaurants were victims of the 2012 closures and closed on 26 September 2012, later being acquired by Euro Garages to become Starbucks. Both sides also gained Ecotricity electric vehicle charging points in 2015.

Both filling stations were formerly operated by Esso directly and included their Snack & Shop offering. Both forecourts were acquired by Euro Garages in 2010 who replaced the Snack & Shop stores with SPAR stores.

Both sides later gained Greggs stores, with eastbound opening in March 2019 and westbound in May 2019, and are situated in their own bespoke unit within each car park. The westbound store was also EG Group's first “pop-up” store, and took less than two months to design, build and install.