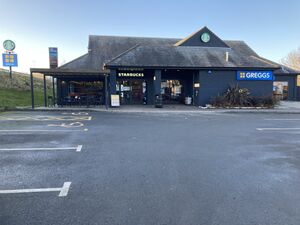 The smaller and more organised of the two Northop services. This is the eastbound side; for the westbound side, see Gateway. 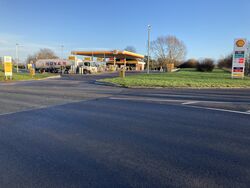 The service area opened in 1990 with a Happy Eater, a Travelodge and a Total forecourt. It had been envisaged as a Little Chef to go with its westbound partner, but neither of these happened. Total knew it as 'Expressway services'.

Forte changed the Happy Eater to the more profitable Little ChefHistory brand in 1996, and this branch received additional attention with a thorough refurbishment providing air conditioning, new furniture and a blue colour scheme, in order to attract more evening diners. It was known as the 'Northop Hall' branch.

Under Granada, a Burger King was opened, but the 'blue' changes were later undone and the Burger King itself closed. That unit became a Coffee Tempo! and later Little Chef Express.

The restaurant was closed by EG Group in April 2017. It re-opened two months later as a Starbucks. A Greggs store then joined the Starbucks in late 2018.

The forecourt became Shell in 2012, and was re-built in 2016. Shell know it as their 'Northop Hall' site, with 'Expressway' being its address. They installed four Shell Recharge electric vehicle charging points in 2021. These aren't expected to be switched on until November 2022