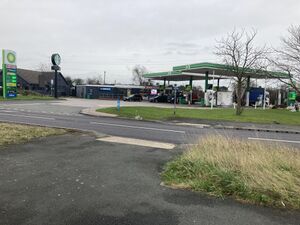 This used to be the Red Ensign at Wheelspin Roundabout, and it's still there, although the roads around it have changed.

Short-stay customer parking is limited to 2 hours maximum stay across the site. No HGV parking is available.

These restrictions are strictly enforced by ParkingEye.

The M56 arbitrarily ends a very short distance to the east of here, and becomes the A494. This service area is signed from the A494 (in both directions), but it is signed as an A-road service area and the signs are not on the M56 itself. Even so, in practical terms, this service area is positioned at the end of the M56.

This junction used to be a roundabout, with the Red Ensign filling station in one corner. At the time this had access from what was called the A540 and the A550. Behind it, on the A550, were two police houses. The forecourt was originally branded Burmah.

In 1986 Forte started proposals to replace the two police houses with a Little ChefHistory. This opened in late 1988/early 1989 and the purchase of the police houses also included a surplus section of land which was retained by Little Chef and was proposed to be used as additional parking in the mid-1990s but this was refused.

The Little Chef later gained a Burger King in 1999 in a new extension to the existing building. As part of the new totem pole sign for the Burger King, the sign also advertised a Travelodge 12 miles away which roughly works out to be the Travelodge hotel on the A55 at Halkyn.

Following the acquisition of Burmah by BP, the site was rebranded to a Save Service Station in 2001 before quickly being acquired by Euro Garages in 2002. By 2007, they had rebranded the site to Texaco with a SPAR store, later becoming a BP site in 2008.

By 2005, the Burger King had closed to make way for a Coffee Tempo! unit which itself was later closed by the end of the century.

The restaurant lost some visibility when the A550 was replaced by the improved A494, and in line with the general demise of the chain, it closed on 25 September 2012.

The forecourt sales building was extended in 2017 and was later converted to a Greggs store in early 2020.