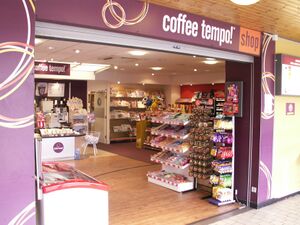 Coffee Tempo! was the name of Little Chef's takeaway offer, introduced in 2006. It was first introduced to Amesbury, and £1.1m was spent rolling it out to a further 16 restaurants with more planned. £5m had been put aside to develop it.

The Coffee Tempo! range was usually provided in its own unit, sometimes a former Burger King or shop. It served a range of hot drinks, cold drinks, sandwiches, snacks and pastries.

Little Chef wanted to keep up with the popular fast food giants by introducing its own 'food on the move' concept. They had looked at using a Costa Coffee franchise but felt the fees were too high. A director responsible for BP's 'Wild Bean Café' was hired to create the Coffee Tempo! idea.

While Coffee Tempo! may have been a very good attempt at creating an in-house brand, by the time it began to be established the road network was already saturated with the much more well-known Costa and Starbucks. Comment was also made that the units could have been more thoroughly refurbished before being converted to Coffee Tempo!.

By 2012, only 11 branches of Coffee Tempo! were left, and these were merged with Little Chef Express, while Little Chef's coffee needs were met by a new partnership with Lavazza.

Coffee Tempo! was Little Chef's third attempt at this market. Back in 1989, they trialled two coffee shops at Oswestry and Markham Moor, and even suggested that these could become a spin-off brand that would open in town centres.

That didn't happen, but a new Little Chef Coffee Stop was rolled out to many sites in 1994. This was a section of each restaurant that was dedicated to achieving a faster turnover for people who were in a rush, rather than the mainly takeaway idea that Coffee Tempo! was.

Coffee Tempo! could be found at the following branches: