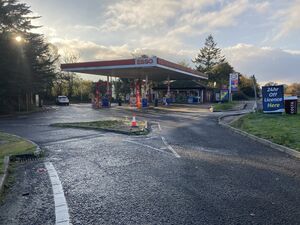 A31 westbound between Southampton and Ringwood

This service area was once defined by its large restaurant, but it's now just a hotel and a petrol station.

The signs make it clear this service area is called Rufus Stone, as that is what the forecourt was called. Many people including the current facilities here refer to it as 'Stoney Cross', the name of an old crossroads which is now applied to the whole area.

The site is connected to the local area by a public footpath. It is possible to walk to the Rufus Stone itself, which is difficult to access from the A31 westbound, but it's a 15-minute trek across the Forest. Do remember that parking is limited.

Short stay parking is provided for cars only. No HGV parking is available. 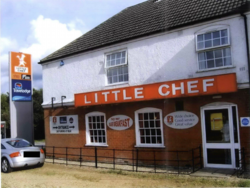 The main building here looks a little grand for a Travelodge, and that's because it was originally the Compton Arms Hotel. The hotel had a large annexe and courtyard, and it had its own restaurant which by the 1980s was called Tally Ho. There was a tourist information centre outside.

To the west of the Compton Arms Hotel was a small petrol station, set far back from the road, which also provided access to garages, workshops and stables.

The area would have seen its value increase when the A31 was selected as the main road to the coast in the 1940s, when the dual carriageway here was opened in the 1960s (and the section to the west in 1975), and also when the M27 opened in 1972.

The forecourt was originally branded Esso and was acquired by Mobil in 1991, who redeveloped it. It was then sold to Q8 in 1994, and re-branded to Pace in 2004.

The filling station was acquired by MFG in 2018, following the merger of MFG with MRH. They are currently planning to extend the forecourt shop. MFG rebranded the shop to Londis in 2020.

A site upgrade was proposed in 1984, which would have seen full slip roads built to provide access in and out the site. The entry slip would have run close to the hotel building, with parking spaces provided there. Further changes were proposed in 1986 by Europrop Ltd, who proposed re-building the petrol station and building a new restaurant building by the garages.

These proposals were dropped when the rapidly-expanding Trusthouse Forte acquired the premises. They turned the ground floor of the hotel into the Stoney Cross branch of Little ChefHistory, and the upstairs area into a Forte Travelodge. They developed a car park around the back of the hotel building, although a lot of the grounds at the rear were left to nature.

A Coffee Stop was soon added to the restaurant, but much of the building remained unused, and the annexe was eventually demolished.

While Little Chef and Travelodge were owned by Granada in 1999, they described the grounds as "poorly maintained" and "unattractive". They proposed demolishing the hotel building, replacing it with a new 40-bed Travelodge. A separate 80-seat Little Chef would then be built in part of the car park. This proposal was refused by the local authority.

Soon after Little Chef was acquired by EG Group, this restaurant closed in March 2017, probably with the intention of converting it to another brand. No changes were made and the restaurant re-opened later in the year. EG Group's rights to the Little Chef name expired at the end of the year, so they removed the branding and called it EG Diner.

That EG Diner closed on 11 June 2018. The building was then thoroughly refurbished, with a Greggs and Subway opening under EG Group branding. By summer 2019 that Greggs and Subway had both closed, leaving just the hotel in that large building.