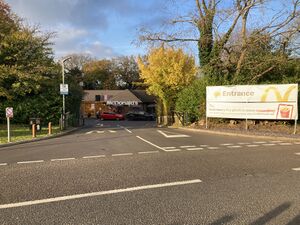 A31 between Southampton and Ringwood

A smaller service area on the A31 in the New Forest. Although this is a dual-sided service area, there are different facilities on either side of the road and an underpass between the two. 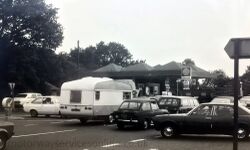 The westbound petrol station in 1977, showing the old road layout and a lot of traffic.

Picket Post is the name of the Burley exit on the A31, named after the post which marked it. This attracted a number of facilities such as the Kettle Tea House, but they were all demolished when the A31 was widened in 1969.

The westbound side was home to an old garage which survived the road widening and was joined by a Shell garage in the early 1970s. The old garage building is still there but is derelict, and now lost within the undergrowth. The new forecourt would have been accessible to traffic on both sides via the gap in the dual carriageway, but this was closed in the 1980s and replaced by the longer underpass which is used today.

Plans to add additional eastbound facilities were also proposed shortly after the road widening and in 1974, Southern Counties Hotels planned to build a hotel on the eastbound side. In 1976, an eastbound Shell filling station was added directly opposite the westbound site and became known as Forest Edge. The newer Forest Edge is larger than the older westbound site and is now open 24 hours.

Southern Counties Hotels continued to renew planning permission for their hotel on the eastbound side throughout the late 1970s and into the 1980s. However in 1985, Lawlor Land Co. submitted plans for a Happy Eater restaurant to be built on the land and this was built, opening in 1986 as the Picket Post branch.

Meanwhile, Shell planned to redevelop the Forest Edge forecourt introducing new pumps, canopy and sales building in 1986 too but these plans were refused. The plans were later amended in 1989 and 1990 before being granted permission. Plans for redevelopment of the Picket Post were also submitted in 1990 but were refused. In 1991, both sites gained Shell's Select store.

The Happy Eater became a Little ChefHistory with a Coffee Stop coffee lounge in 1996. The Little Chef closed in February 2012 as part of R Capital's closures. A McDonald's opened in the old building in April 2014.