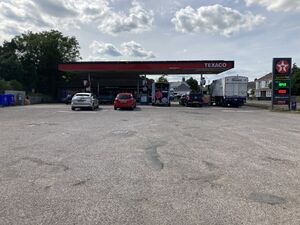 An independent service station on the A35. It is only signed as services when travelling westbound, but is accessible from both sides. 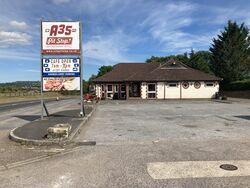 The A35 Pit Stop building.

The workshop garage and service station on the crossroads has been there since at least the 1950s and was previously branded Esso. The filling station and restaurant were originally part of the same building in the centre of the site but they were later separated into two buildings in the late 1980s.

There have been several attempts since the 1990s to replace the workshop garage with houses however none of these have plans have been put into action.

The site was sold to SGN Retail in April 2022. Following the takeover, SGN Retail rebranded the store from Londis to Nisa Express. They also intend to make improvements to the café and motel.

The service area is not related to the Axminster Little ChefHistory, which was positioned slightly west of here. The Ordnance Survey has chosen that one to be the marked service area, even though it's Kilmington Cross that is signposted.