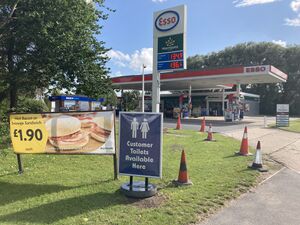 A31 westbound at Ringwood

A small forecourt on the A31 as it passes through Ringwood.

The A31 around Ringwood became a dual carriageway in 1969. Around this time, a new petrol station was built next to the old carriageway, next door to The Fish Inn.

The filling station was formerly branded Texaco. In 2007, the sales shop was expanded and rebuilt, gaining Somerfield branding in the process. In 2010, following the purchase of Somerfield by The Co-operative Group, the store was re-branded to Co-op Food.

In late 2016, the filling station was acquired by Rontec who re-branded the site to Esso, and the shop to SPAR, with a Subway concession also being added. The shop then changed again in late 2019 with the store rebranding to Rontec's own brand Shop'N Drive which offered a range of products from Morrisons Select. The store then became a full Morrisons Daily store in summer 2020, with the Subway store being replaced by a hot food counter.

The forecourt wasn't signed from the road as an official service station. In 2015, a number of new road signs were erected to try to address the poor safety record of this old-fashioned section of road. Those signs included a new advance warning sign so that motorists needing a break are no longer changing lanes at the last moment.

The old alignment of the A31 was closed in January 2022 for widening works. The forecourt was forced to close as it was no longer accessible, with the shop and fuel pumps being boarded up. The site reopened in December 2022 and now has full, formal signage.

The petrol station's claim to fame is that the bollards around the exit were the scene of a crash in a 2006 episode of Top Gear. The presenters had stopped there to tend to the dog and purchase from the shop.