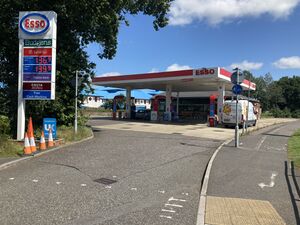 12 more photos in the gallery
Location:

A3060 eastbound at Cooper Dean

Nestled in the corner of the Royal Hospital Bournemouth is this rare example of a signposted service station that sits deep within an urban area. The "Services" signs direct traffic towards the restaurants.

The facilities are easily accessed from the A338 Bournemouth Spur Road via the Castle Lane Roundabout, but not signposted from it, so the provision of a full signposted service area remains a secret for local traffic on the A3060.

Parking within the Burger King car park is limited to 90 minutes maximum stay and is strictly enforced by Civil Enforcement Ltd.

Customers of Toby Carvery and Travelodge are also required to provide their registration number to comply with their parking policy, which is strictly enforced by Euro Car Parks.

The Travelodge, a former Innkeepers Lodge.

The exit from the service area is based on the original alignment of Throop Road, which was broken up when the Wessex Way was built. This left a short section isolated, including some properties called Butler's Cottages. These were demolished in the early 1990s when the service area was built.

The filling station went onto receive a major redevelopment in late 2000, gaining a larger sales building which later became a SPAR store. Meanwhile, The Starfish pub and indoor play area both closed in the early 2000s and became a Toby Carvery restaurant, with its indoor play area becoming an Innkeepers Lodge. The Innkeepers Lodge later became a Travelodge in the early 2010s.

The filling station was also rebranded to Esso in 2016, with the SPAR store rebranding to Budgens in 2019.