The name Little Chef Express has had three incarnations during its run.

One of the 1996 Little Chef Express logos.

It was first created in 1995 by Forte, who had been providing more takeaway outlets in their motorway services and began to feel people might expect the same of the larger Little Chefs.

Little Chef Express allowed some popular dishes to be quickly picked up and taken away. It was introduced to Markham Moor and believed to be an option for Forte to use with its Happy Eaters, but this didn't happen.

After Forte was taken over by Granada, the trial initially continued, with new takeaways at Sparkford, Egginton and Colchester. These had a blue colour scheme, neon lighting, promoted the word "diner" and used a logo showing Charlie moving quickly. They were removed after several months.

The version being promoted in 2001.

With all the brands newly acquired by Granada during the takeover, they began to re-think their restaurant options. Many of their larger Fresh Express restaurants at motorway services had a counter taking the name Little Chef Express. This was designed as a takeaway brand which would take on the fast food names, paying particular attention to younger customers.

This version of Little Chef Express used the same Charlie emblem as the previous version, but this time he was positioned on a red background, with "express" written in purple.

Under Granada, Little Chef Express also made an appearance at railway stations, bus stations and aboard ferries. Most of these did not last long as they were dependent on being part of Granada's foodservice empire.

After Granada were broken up, the motorway sites continued as Moto-operated, full-service Little Chef restaurants, even if they had previously been part of an Express food court. Two unusual branches at Belfast and Dover briefly used the name 'Little Chef Classics', apparently because they were too small to operate as a full Little Chef. 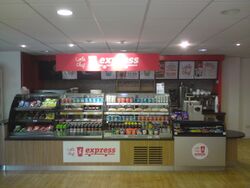 RCapital decided to remove the 11 remaining Coffee Tempo! outlets in 2012, replacing them with a new-look 'Little Chef Express'.

The Little Chef Express at Warminster was removed in favour of Subway.

By February 2018 all Little Chef Expresses had closed.