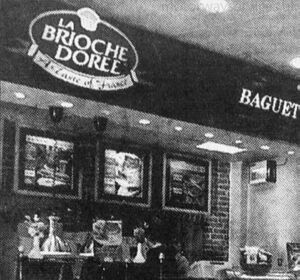 Brioche Dorée is a French chain of bakeries and cafés, operating around the world. In the early 1990s, it was used by Welcome Break under its previous stylisation 'La Brioche Doree' to add some variety to the offering at some Granary restaurants.

La Brioche Doree served a variety of sandwiches and soups from a single counter in the restaurant area. Its slogan was "a taste of France".

It was also used by Granada at Lancaster services, and probably others. In 1996, Granada documents continued to reference it, and they said it was a trial of a possible new brand that should be treated as a core part of their offer. Granada also trialled it inside some Little Chef restaurants.

In 2001 there were 29 La Brioche Doree outlets in the UK, which were all ran by Welcome Break and Select Service Partner (SSP). They then started to be phased out.

La Brioche Doree used to operate at the following services: