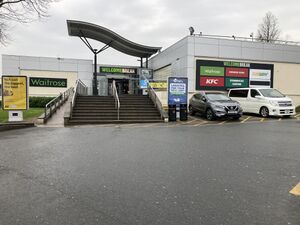 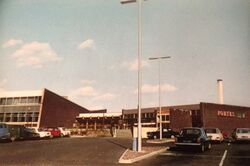 Northern Powergrid is planning to increase the electricity capacity at Woodall, to allow it to potentially become a charging hub in the future.

The Yorkshire village of Wales is positioned less than two miles north of the service area. This gives rise to a whole load of trick trivia questions, as Woodall can claim to be the closest service area to a Welsh border.

Three possible sites were examined before the services were built: Killamarsh, Wales and Woodall. The Ministry liked the Wales site, but the local authority said it was too close to the village. Its proximity to Sprotbrough was a concern too. The chosen site was known throughout the planning process as "Killamarsh".

Responses were received from Fortes and Highway Restaurants Ltd (a consortium between Trust Houses, Blue Star and Burmah). Fortes's rent offer would prove to be more lucrative if the road would prove to be busy, and on this basis they won the bid.

Originally the restaurant had orange settees with a brown, Scandinavian-style strip-wood ceiling. A screen sectioned off an area for lorry drivers. The buildings were relatively long and thin, with most of the subsequent extensions adding to the front.

The large rounded part of the southbound building was the transport café. It became a Little Chef in around 1982.

The service area was the scene of a violent football clash in January 1986, where a number of injuries were caused. Such incidents were common at service areas at the time.

As with most Welcome Break service areas, David Fisher was commissioned to paint some artwork, which was displayed all around the southbound lobby. At Woodall the mural was dedicated to Harry Brearley, the Sheffield man who is credited with inventing stainless steel. It has since been removed.

The footbridge would have been connected to the main building at each end, but it is a separate structure in its own right. Given the exposed location, this can make it feel rather cold and bleak. A rearrangement on the southbound side saw the bridge's connection to the main building blocked off, meaning customers had to leave via a second exit and follow a winding path round to the main entrance.

Concern was caused by the plan to widen the M1 between J28 and J32, which was announced in 1989. Forte were unable to build a hotel in case this was impacted by the roadworks. When the road was eventually widened in 2016, it was done on a small scale and didn't impact the service area.

In early 2020, the forecourts were converted to Welcome Break branding.

This was one of the only service stations with Burger King, KFC and McDonald's all available. The first two were operated by Welcome Break while the latter was run by McDonald's on a long-term lease. On 21 March 2020 the McDonald's closed due to COVID-19, and did not reopen. The unit was later converted to a Burger King unit alongside a Chopstix Noodle Bar and The Good Breakfast hybrid unit in early 2021.

The refurbishment allowed the northbound side to move closer to the food court layout that is common across the country. The McDonald's unit had previously created an awkward shape.

The southbound WHSmith store closed on 14 March 2022 for a major refurbishment. The store reopened on 28 March 2022 and features all new WHSmith branding, fixtures and fittings in what is described as a 'premium' upgrade to the store. The store also now features a new food to go range with a The Good Bakery hot food cabinet and new f'real Milkshakes and Slush Puppie machines.