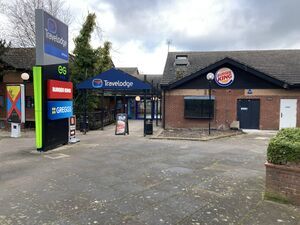 A38 at Watchorn Roundabout, Derby
(also accessible to traffic on the A61 and the B6179)

Although the facilities offered are a standard affair familiar to regular drivers, the building here looks deceptively grand. 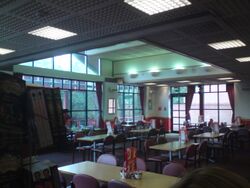 Planned in 1987 as Swanwick services, Alfreton was part of Granada's plans to expand Granada Hotel. This one was styled to be particularly grand, with its large building and garden fronting the road, as well as the covered walkway at the entrance. There is a small terrace at the front of the building and the toilets are in a small, separate area.

In practice, the garden at the front of the building has been allowed to grow into a wildflower meadow, and the trees now obscure most of the view of the building from the road. The terrace has never been used and the car park now provides access to a busy business park and community fire station.

After Granada decided to leave hotels, this place was sold to Trusthouse Forte and they turned it into a Little ChefHistory/Burger King/Travelodge combination site in November 1994. This fell back under the responsibility of Granada when they took over Trusthouse Forte in 1995, and was once again promoted as one of their premier sites. By now it was known as 'Alfreton services'.

The site stayed with Little Chef when Granada were broken up - if it had been classed as a major site, it would have been owned by Moto. The Burger King closed in the mid-2000s but reopened in 2013.

EG Group acquired the Little Chef in January 2017, with the intention of turning it into a Starbucks. Starbucks didn't agree, and by January 2018 EG Group had run out of time. They transferred the restaurant to the temporary brand EG Diner.

The EG Diner closed on 15 August 2018, with the Burger King closing the following day, to allow the dining area to be refurbished. The building reopened in October 2018 with a new Burger King and Greggs replacing the EG Diner.

A Sainsbury's On the Go store opened in May 2019 in the original Burger King unit. This closed on 26 March 2020 owing to poor trade. The Greggs store also later closed in November 2022.

Despite Granada having ended their involvement in the site (and indeed all service areas) in 2001, as of 2022 most directories still have the building named as "Granada Motorway Services". It has now been wrongly labelled for longer than they actually did own it. It appears to be the modern version of an old pub who's name lives on.

The forecourt here was originally branded Mobil when it opened but transferred to BP in 1997 when the two companies merged. The forecourt then became ownership of Malthurst in the early 2000s who added a Costcutter store.

Malthurst became MRH in the early 2010s and was later acquired by MFG in 2018 who rebranded the shop to Londis.

MFG redeveloped the forecourt in Spring 2019 demolishing the existing car wash, sales building and plant room to make way for a larger sales building and parking area. The new site reopened in June 2019 with a new, larger Londis store and a Subway franchise. A GeniePoint electric vehicle charging point was also installed as part of the new parking area.