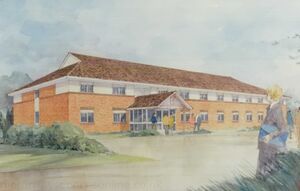 Granada Lodge was Granada's initial take on the newly-emerging motel market. They started building them in the 1980s, but when Granada acquired Trusthouse Forte they gained access to the established Travelodge brand, which they then used instead.

Granada Lodge was a clear sign of Granada trying to take on Forte. Their expansion was quick and often strategic, especially around 1988. It's also a good precursor to the UK budget hotel industry in the 2000s, where big names would plan their sites around their competition and not profits.

The recession of the early 1990s offered Granada Lodge a further boost, as businessmen were looking to reduce their accommodation costs and became loyal budget hotel customers. Each room promised an en suite, colour television, radio, wake-up alarm, heating, double glazing and tea and coffee making facilities, which made for a very '90s inventory. Each branch had the service area name prominently displayed on the logo.

Each Granada Lodge directed guests to the main Granada building next door, where there would be a Country Kitchen Restaurant. As part of the 1996 Granada rebrand, a new logo was created, which read "Lodge" with a red L. It's not clear if this was used before Travelodge replaced it.

The name Granada Hotel was used for several larger and more upmarket sites they experimented with. These had on-site hotels and bars. Granada concluded that the budget hotel business performed better, which would be why they found Travelodge so attractive.

Granada Lodge could be found at: