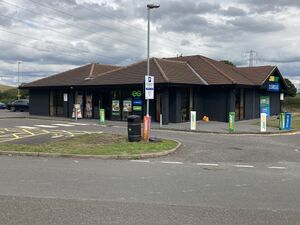 Talke was intended to be an upmarket hotel, but it managed to descend in to a typical service station set up, even if it is missing the key provision of any food.

Parking within the restaurant car park is limited to 1 hour maximum stay and is strictly enforced by VARS Technology Limited. 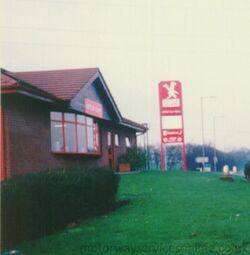 The building immediately after becoming a Little Chef.

The site replaced a petrol station which had served the A34 at Four Lane Ends since the 1940s. It was demolished and re-built by Granada as a Granada Hotel with its own restaurant alongside a small, tall stand-alone AJ's restaurant. The Granada Hotel was aimed mainly at business travellers, and promoted as the Stoke-on-Trent branch.

The site was sold to Trusthouse Forte in October 1994 who quickly changed the stand-alone restaurant to Little ChefHistory and the hotel to Travelodge. The Granada Hotel had only been open 14 months. Shortly after its conversion the building was given a significant extension to give it its current shape.

Granada later bought Forte, and in 1998 they added a Burger King to the restaurant, which later closed. The branch then spent some time as a Little Chef Choices. At some point during the late 1990s or early 2000s, the restaurant situated inside the hotel also closed.

The Little Chef was still trading when the restaurant building was acquired by EG Group in 2017. They were expected to turn the Little Chef into a Starbucks, but this couldn't happen. Their rights to the brand ran out, so the Little Chef was forced to become EG Diner in January 2018. The EG Diner then closed on 23 May 2018 as a result of low custom, laving just the Subway.

Despite having never had a forecourt or qualified for signage, Talke is still marked as a full service area on Ordnance Survey mapping.