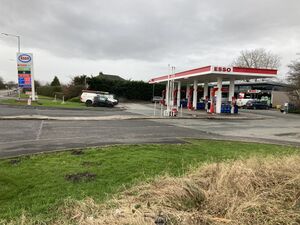 A51 between Chester and Nantwich

Gowy offers a petrol station at the side of the A51, forming the only signed service area between Chester and Stoke-on-Trent. 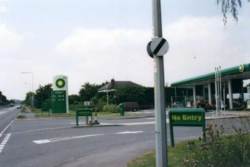 The Gowy garage first opened in the 1950s and has been branded BP since opening.

The site was previously operated by BP directly who in 1990 submitted plans to redevelop the site to add a retail shop, restaurant, business centre and overnight accommodation to the site in a building which would sit alongside the River Gowy however planning for this was refused.

By the late 1990s, the site had been acquired by Octo Petroleum Ltd. who in 1997 redeveloped the site demolishing the existing pumps and buildings and altering the site layout to the layout we see here today with a larger sales building to the east of the site. A jet wash was also added. The sales building gained another extension in 2003 which saw the addition of a bakery. The shop was also branded 'BP express shopping' at this point.

The filling station was later acquired by Euro Garages in the mid-2000s who added a SPAR store and replaced the bakery with a Subway store. Euro Garages later replaced the sales building entirely in 2012, allowing more shop space and relocating the Subway inside.

Euro Garages rebranded the site to Esso in 2019 after over 50 years of being a BP site.

Less than half a mile to the west of here on the opposite side of the road was the Littleton branch of Little ChefHistory which traded from the 1970s to 2004 before being closed. The Little Chef later reopened in 2006 before closing again in 2010 and was been demolished in 2015.