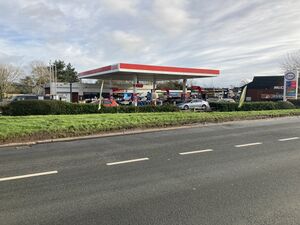 A half-way point for traffic on the A41 towards Chester.

Parking within the McDonald's car park is limited to 90 minutes maximum stay and is strictly enforced by Premier Park Ltd. 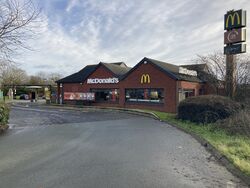 The McDonald's restaurant is the old Little Chef building and still retaining the red bricks.

As part of the western bypass of Whitchurch that was being planned in the 1980s, a facility was suggested for new A525 Wrexham Road roundabout. Planning permission for a petrol station, restaurant, tourist information centre, picnic area and associated parking was granted in 1988. This was amended to just provide a petrol station and restaurant with associated parking.

The new bypass opened in 1992, with an Esso filling station and the Whitchurch branch of Little ChefHistory opening shortly after. The Little Chef later gained an extension in 1995 when a Coffee Stop was added, and again in 1998, gaining a Burger King franchise in 1999.

There was a proposal to added a 40-bed Travelodge in 1999 but this was never built.

The Little Chef restaurant closed in 2012 as part of the company's widespread downsizing. The building was converted to a McDonald's Drive Thru, still retaining its red brick exterior.

The McDonald's outdoor furniture and kitchen equipment were moved here from their temporary branch that operated during the 2012 Olympic Games in London. A plaque on the wall informs customers of this.

The forecourt was acquired by Euro Garages in 2015, who added a SPAR store and a Subway concession to the filling station. Euro Garages later demolished the car wash in 2016 and built a Starbucks Drive Thru in its place. A Greggs was added in 2017, positioned in a new extension to the building.

The Subway store remained closed after the 2020 COVID-19 lockdown. It reopened in summer 2022.