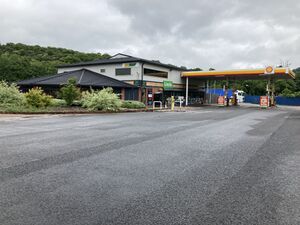 A40 eastbound between Ross-on-Wye and Monmouth

The larger of the two service areas at Symonds Yat, the main side is a former truckstop with an unusual layout.

Prices are paid in the shop or using PayByPhone. The location code is 801390. 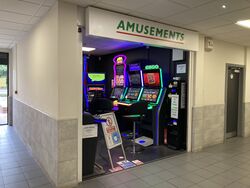 Evidence of First's styling is still visible inside.

The site was developed in 1975 and operated as a truckstop, although the regulations at the time didn't define what a 'truckstop' was, which is why it was never formally signposted as one. It was ran by Truckers, who were themselves acquired by Norfolk House. A new facilities building was built in 1999.

A few years later, a formal car park was created. The original car park is the tiny area next the forecourt, which has been closed off. The increased car parking was arguably the start of this becoming more of a general service area than a dedicated truckstop, but successive owners continued to highlight the ample parking for HGVs.

The service area was purchased by motorway operator First in 2006. First provided their green and white signage all around, including on a large "Welcome to First Motorway Services" sign visible from the A40. Other posters pointed out that it was the "last fuel [before the] M5". First claimed they had made a success of it and wanted to take over several more.

First were taken over by Roadchef in 2011, who said this was their first A-road site and that they would work with it and see what could be done. Under Roadchef, the forecourt changed from BP to Murco, while First's shop branding was retained, but with a Costa unit added.

Roadchef sold the site to High Noon Stores, who changed the Costa unit to their own creation, 'Route 40 Café'. They also opened a SPAR store.

After High Noon Stores fell into administration, MFG purchased the site in March 2017. A Londis store replaced the former SPAR store and the fuel supply changed again from Murco to Shell. The independent café remained trading until late 2018 when MFG closed the café and replaced it with a Subway store, which opened early 2019.

Evidence of First's ownership is still visible inside the amenity building, with signage still displayed in First's distinctive green and red colours.

One unusual feature is the display of a large MID (the fuel price sign), positioned well before the service area, on the main A40.

The petrol station is one of 87 petrol stations that MFG intends to sell in 2022 under a deal with the Competition and Markets Authority. Despite this, MFG have applied for planning permission to build an EV charging hub here.