Single site located between junctions with access to both sides

A small service area on the A449 (at the end of the M50), on the southbound side of the road. After years of being a shadow of its former self, it went though a major refurbishment with a new forecourt, shop and a drive thru restaurant.

First 2 hours free for all vehicles, after which cars must pay £8 for up to 24 hours and HGVs, coaches and commercial vehicles must pay £14.99, or £19.99 to include a meal voucher.

Prices are paid in the shop.

The fees are strictly enforced by Parking Eye. 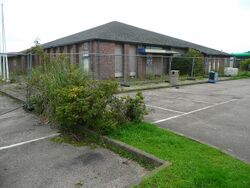 This site is not to be confused with the Premier Inn and Beefeater (Travellers Rest) accessed from the roundabout with the A449 at the end of the M50.

Although it is not regarded as a motorway service area, at some point two unusual road signs were placed on the M50 to help motorists find the services. Another sign on the A40 advised traffic that there is a service area only half a mile off its route, which has now been almost lost in the foliage.

There was a lot of debate about whether the road needed services. Initially it was said to be too short for any services. In 1958 Ministers decided the motorway would offer good views and should have viewpoints or rest areas. This was later turned into a full service area (location not known) but was cancelled due to objections relating to environmental damage, then the services were planned again, then it was decided the road didn't need any services.

The service area was opened in 1966 as an independently operated a pair of petrol stations. In 1985 it was taken over by a joint partnership between BP and Welcome Break, who at the time were still a very small player. They demolished the petrol stations and replaced them with new buildings, and with larger BP petrol stations to the side.

The north-eastbound building was used by Welcome Break's sister company, Happy Eater, while a larger Welcome Break-branded building was provided on the south-westbound side. It had a restaurant, shop and toilets, though the entrance to the toilets was outside. Under Forte's ownership, this building had The Granary and The Shop.

Welcome Break closed their facilities in 2001, and the land quickly became derelict. The company had only just opened Derby South so was still interested in A-road service areas, but not this one. Council records as late as 2004 still showed Welcome Break as the operator.

Ten years later, Welcome Break's road signs (and even parking prices) could be found all over the south-westbound services. The north-eastbound side had most of its branding removed in 2005, save for a few treats for eagle-eyed enthusiasts. Externally, both the north and south sites had remained virtually unchanged since Welcome Break left them, and they were hardly cutting-edge in those days either. For most of the 2000s, it was a Welcome Break time-lock.

In about 1991, Labels Outlet Shoppingwebsite setup its outlet centre here at Overross. They complained that they weren't visible enough from the road, and in 2004 they purchased the north-eastbound service station and set about looking at how they could use the land.

Ross Labels reopened the abandoned Red Hen restaurant as French Hen, but this was not successful and closed soon after. It was then demolished and replaced by a new KFC, which opened in 2006. A McDonald's had also been advertised, but wasn't built.

Ross Labels then built a new entrance to their site from the old service station car park, but they described the area as "still feeling unfinished". They were very unhappy when their proposal to develop the empty former petrol station area was refused by the local authority, pointing out that their whole project had been trying to improve the "eyesore" that the area was. This was eventually turned into offices.

EG Group and the southbound side 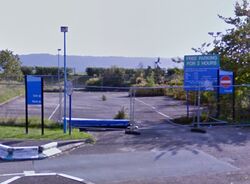 A range of Welcome Break signs were still visible in 2009.

It is the south-westbound side that had become almost completely derelict, aside from the petrol station which was itself very run-down. It used old styling BP hoped to have phased out. The restaurant and toilet symbols on the road sign were temporarily covered up. The main building remained boarded up for more than 10 years.

Euro Garages bought the southbound service area and demolished everything, opening new buildings in 2012. It had been expected that a Burger King restaurant would be included, but a Greggs opened instead, alongside a Subway and a separate Starbucks Drive Thru. Euro Garages described both the planned Burger King and the Starbucks as one of the first of their kind.

The filling station was re-branded from BP to Esso in June 2018.

The Burger King drive thru finally opened on 4 June 2020, filling the gap between the Starbucks and the Esso.

The SPAR store changed its branding to Sainsbury's On the go in 2021.