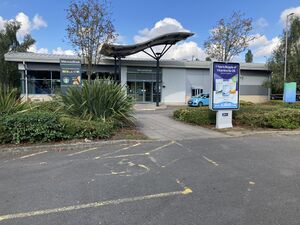 A lot of people seem to forget about Derby South services, but it is still there even if it doesn't have the full range of facilities that you'd expect from its sister sites.

First 2 hours free for all vehicles, after which cars must pay £15 for a further 24 hours and HGVs, caravans and coaches must pay £24. There is no meal voucher option here for HGVs.

Major investments were made in A-road service areas around the late 1980s, and again from the early 2010s, but there is surprisingly little from the period in between. Derby South is a rare example from that gap.

The service area was known as 'Derby South' by Welcome Break, but called 'Shardlow' by locals, as it's a more precise name and avoids confusion with the other Derby services, that is actually further south. The hotel at Derby South is officially named 'Donington', which is also the name of a Moto service area.

There was plenty of scope for confusion, and to add to it, Welcome Break themselves were shortening the name to just 'Derby'. This had taken priority by about 2010. They sometimes even call the two sides 'Derby West' and 'Derby East'!

Welcome Break developed the site into two full service areas in 2001, with buildings designed by ACP Architects. Each side had a single amenity building, which has a forecourt sales shop at one end and a restaurant at the other. On the eastbound side, the unusual decision was taken to route all traffic past the building entrance, while on the westbound side that was avoided by running the road through the forecourt.

At the time, Welcome Break had recently lost all of their existing A-road service areas when the company was sold. The new location was evidence of investment in a new idea from their new owners and a chance to take attention away from Granada, who had also recently opened a site at Donington Park, a little further to the east.

Even more unusual was Welcome Break's decision to open each side with a Little ChefHistory restaurant. Welcome Break had been forced to close all their Little Chefs as a condition of the sale only a few years previous. It may be that this is further proof of new thinking, or perhaps it was an effort to copy other A-road service areas. In any case, Little Chef were at their largest at the time and would have been open to new partnerships.

The two Little Chefs were joined by Burger Kings. The eastbound Burger King also had a drive thru lane which saw users directed alongside the forecourt building and loop around the front of the building to collect their items. Evidence of the drive thru lane can still be seen today, with the drive thru window still being in place, and the access road now being used for parking. 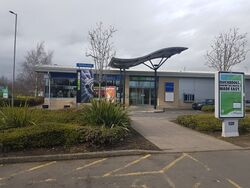 The service area in 2019, with two covered logos, an old-style mural sign, and a very old-style green road sign just about visible on the left.

Derby South is Welcome Break's smallest site, and as a result it is often forgotten when branding and styling are updated.

Across the country, Welcome Break replaced all their external signs and logos with a new style in 2006, and began phasing out all their use of the blue colour. At Derby South, as of 2021, most of the car park signs are still in the old style from 2001 and their original blue can still be found along some of the walls and around the toilet block.

While Derby South did get new entrance signs in 2006, at most other sites these were short-lived. At Derby South these were hung on to until early 2021. By this point these signs were mostly bare, due to the number of brand closures that had taken place.

The westbound Eat In restaurant closed after a few years, while the eastbound one was still open in 2017, by which point it was the last remaining one in the country. As a result a decision was taken to remove all the branding from it, but it continued trading for another year, before it closed and became an empty seating area. Some Eat In logos can still be found on old signage around the site.

The forecourt shop had changed from carrying Welcome Break's branding to WHSmith in 2007. Following the closure of the Burger Kings and pretty much all the other facilities here, the two service areas both effectively became Shell filling stations with a WHSmith shop and some toilets. The WHSmith branding was all removed in late 2019, allowing for the forecourts themselves to be rebranded from Shell to Welcome Break's new in-house branding in the following year.

Both amenity buildings were now effectively operate as large Welcome Break-branded forecourts, promoting their hot food counter, Starbucks on the Go machines and fuel card schemes, instead of the wide variety of big-name brands you might have expected to find in a main amenity building. Inside the empty space was taken up mostly by sales items, with a small seating area available in one corner.

A thorough internal refurbishment eventually happened during autumn 2022. Greggs and Starbucks Drive Thrus will introduce new facilities to the site, focusing on the 'grab and go' market. This will be the first Greggs at a Welcome Break branded site: Greggs has been a long-term brand partner of Welcome Break's parent company, but Moto have exclusive access to Greggs on the motorways, limiting Welcome Break's potential use of it for the time being.