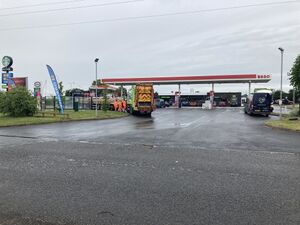 A modern petrol station by a roundabout on the A449.

Hartlebury service station was first planned in 1988 and opened in around 1992 as an Esso filling station, operated by them directly. The site formerly included Esso's Snack & Shop offering until 2009 when the site was redeveloped gaining a larger sales building to house an On the Run café with a Costa offering.

The filling station was later acquired by Euro Garages in late 2015 who rebranded the shop to SPAR and replaced the On the Run café with Greggs and Subway concessions. The HGV parking area was removed shortly after the takeover and Euro Garages built a Starbucks Drive Thru in its place which opened at 8am on 30 March 2018.

The SPAR store was replaced with an Asda On the Move store in late November 2021 and was the second in the UK to open as a premium Asda On the Move store with an additional 'Asda Extra Special' range. EG Group also added a jet wash to the forecourt. A LEON Coffee machine trial was later introduced in summer 2022, replacing the former Starbucks on the Go machines. If successful, EG Group intend to roll-out LEON Coffee to replace Starbucks on the Go across their network.

Half a mile south of here is the former Hartlebury branch of Little Chef and Travelodge. The Little Chef closed in 2012 as part of a closure of underperforming restaurants and is now home to Royal Spice.