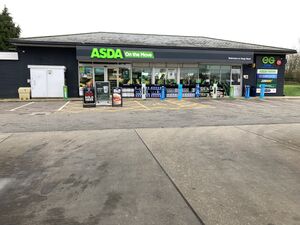 Despite being one of the UK's largest and most well-known grocery chains, Asda have had very little experience at service areas on major roads.

This changed in 2020, when EG Group announced plans to open Asda On the Move mini-markets in their forecourts and service areas, starting with the forecourt shop at Ashby de la Zouch in October. This trial was a precursor to EG Group acquiring the Asda business in February 2021.

More Asda On the Move stores have since opened, replacing EG Group's existing forecourt shop brands such as SPAR and Sainsbury's On the Go. Some stores have included new Leon Coffee machines, as well as an extended Asda product range and more recently, Cooplands Bakery.

EG Group have since suggested they want Asda to become a more integral part of their service areas, with a mass rollout of the brand to replace SPAR planned throughout 2023.

Asda On the Move can be found at the following signposted service areas: