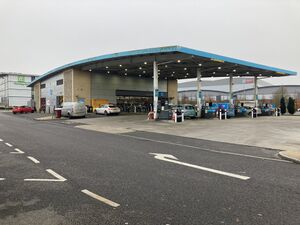 A303 westbound between Andover and Amesbury

Basically a retail park, Solstice Park is signposted as a service area on the westbound side of the A303. There are no signs eastbound, but access is still possible via the Bulford exit on the A303.

Short stay HGV, caravan and motorhome parking is available at the filling station. 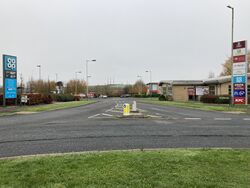 The entrance to the service area, with mini-roundabout in the distance, surrounded by restaurants and units.

The Solstice Park development has six Charlotte Moreton sculptures, one of which, The Ancestor, is positioned where traffic leaves the A303 westbound.

When the service area opened, signs were placed on the A303 westbound advertising the site to passing motorists. When traffic is flowing well, the easy access to the A303 is a bonus, but for the restaurants a lot of the appeal of this location probably comes from the regular, severe queues that the A303 westbound suffers from. The lack of eastbound signage may be to avoid competing with nearby Countess services.

The Folly Bottom junction on the outskirts of Amesbury was put forward for development in 1999. The project was named Solstice Park, and included designated areas for employment, housing and leisure, positioned where the service area is today.

The rearranged junction with the A303 was completed in 2003, and from this point traffic leaving the A303 would now be able to rejoin the road. The owners of the development Amesbury Property Company put forward plans for a 120-bed hotel and filling station on the land designated for leisure development. These plans had the hotel and filling station situated in the middle of the site in one, large amenity building with space for two retail units and a restaurant inside and parking for all vehicles situated around the outside.

Their plans also featured a drive thru lane attached to the main building, a children's play area and a car wash. It was quite ambitious for a trunk road service area and were more like something you would see on the side of a motorway.

The final plan was eventually settled upon in 2004 when Amesbury Property Company proposed a 149-bed hotel, filling station, pub and restaurant.

The service area opened a year later with a Somerfield filling station, Holiday Inn hotel, Pizza Hut restaurant and the Amesbury Archer branch of Brewers Fayre all situated off the Solstice Roundabout, which was built on the main Solstice Park Avenue that runs through the new development. Despite the seemingly haphazard layout of these facilities, there are still a number of HGV bays provided by the filling station. 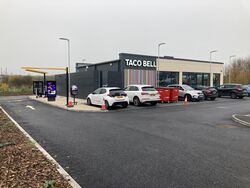 When entering the service area, traffic is immediately met by a mini roundabout. This was built as part of the original service area and was designed so that more leisure development could be built on neighbouring land, around what's now called Mid Summer Place.

Land to the north of the mini-roundabout was the first to be developed in around 2007 when a KFC Drive Thru was added. The KFC was later joined in 2012 by a Costa Drive Thru and McDonald's Drive Thru to the south-westerly side of the roundabout, as well as a Toby Carvery to the far west in 2015.

The Brewers Fayre was later converted to a Harvester in 2008, retaining the Amesbury Archer branch name.

Following the merger of Somerfield with The Co-operative Group, in 2010 the filling station was rebranded to Texaco with the shop becoming a Co-op Food store. This changed to Co-op Petrol in 2017.

16 Tesla Superchargers were installed within the Holiday Inn car park in 2020. InstaVolt charging points were also added to the Costa and McDonald's car parks in summer 2021.

The final parcel of land in the north-west corner was developed into two drive thru units in early 2022, with associated parking and the installation of a GRIDSERVE electric vehicle charging hub with eight high-powered chargers. Unit 1 became a Greggs Drive Thru, which opened in September 2022, and Unit 2 became a Taco Bell Drive Thru, which opened on 21 November 2022. The GRIDSERVE electric vehicle charging hub went live in January 2023.