A303 at Countess Roundabout
(also accessible to traffic on the A345)

Traffic can celebrate clearing the notorious traffic at Stonehenge with a small service area by the Countess Roundabout. 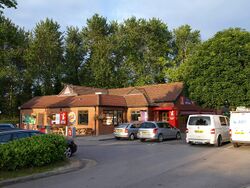 Countess is just a mile west of Solstice. It is located on the A303 eastbound, but immediately after a roundabout and with an exit road that loops back round.

The internal road layout is a bit odd, with a confusing range of parking areas and strange-shaped roads that get used as parking bays, all of which serve the same facilities.

Despite the name Amesbury being well-used, the roundabout and services are officially called Countess. The hotel sometimes promotes itself as Stonehenge, as it is one of the closest hotels to the stones.

The site was developed by Forte and opened in 1989 with a Shell filling station, Travelodge hotel and the Amesbury branch of Little ChefHistory. The restaurant and hotel had matching brown brick exteriors, with low pitched roofs.

The Little Chef gained a Burger King with a separate entrance in 1998. It gained its own game arcade in 2001.

A Harry Ramsden's and Caffè Ritazza were then added as part of Little Chef Choices, with the country's first Coffee Tempo! following in 2006. In 2011, the branch received a thorough refurbishment as part of the Wonderfully British project, where it gained a Good To Go facility and had its exterior covered in bright red cladding.

The actual refurbishment took place in June 2018, and was expected to be complete in time for the July summer season. The actual opening took place in late August, meaning the summer's trade had been missed. The building now had a Burger King, Greggs and Subway, plus a small unit was left in the corner that was lined up to become a Starbucks.

The Starbucks plan failed again, and the empty unit became a Sainsbury's On the go store in June 2019. It was rebranded to SPAR in time for the 2021 summer season, before permanently closing that autumn.