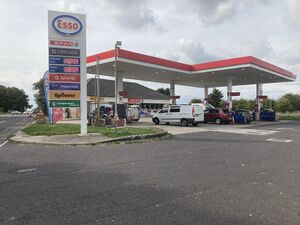 A former Little Chef by the side of the A303. Although traffic can access it in both directions, crossing the road from the eastbound side is hazardous so not signposted. 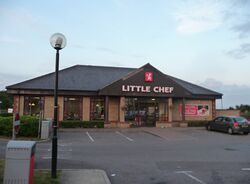 In the late 1960s, two Little Chefs opened on the A303, one two miles down the road at Chicklade and one here at Willoughby Hedge.

It was known as the East Knoyle branch (later 'West Knoyle') and appears to have opened in 1968, taking over an existing café that had been built in 1953. This was next to a forecourt which appears to have been there since the 1940s, and was branded Shell at the time.

This is a busy holiday route, which made it one of the busiest Little Chefs in the country. Granada rebuilt the building in 1999, with the new restaurant having light, weathered stone cladding and large windows. While it looked different to the Blue Bell Hill branch it copied, they were substantially the same. It gained a Coffee Tempo! in 2006, and later gained a Little Chef Express.

Parts of the building were painted bright red in 2015. By this stage it continued to have an extremely high customer turnover, but a refinancing deal by previous owners meant it was spending most of its income on rent.

Following the acquisition of Little Chef by EG Group, the restaurant closed in June 2017. It reopened as a Starbucks a month later. A Chargemaster electric vehicle charging point remained in the car park following the takeover, but this was removed during a minor refurbishment in summer 2022.

EG Group permanently closed their Subway store that was situated inside the filling station, following the 2020 lockdowns. This space was later filled with a new Rollover hot food cabinet in summer 2022.