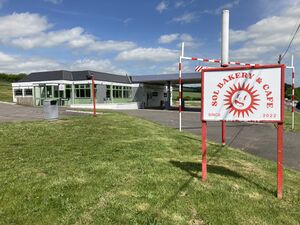 Chicklade was once a fully signed service area on the A303. The road signs were taken down in 2015, but the place itself soldiered on. A new restaurant opened in April 2022.

Chicklade is a filling station with a small restaurant attached located on land owned by the Fonthill Estate. The service area was built in the late 1960s as an Esso forecourt with a small branch of Little ChefHistory attached.

The Little Chef lasted until September 2012, when there was a wave of closures of under-performing restaurants. Chicklade was lucky to survive this long as it had a partner site two miles down the road at West Knoyle, which was refurbished to a much higher standard. When the Little Chef closed the service area was removed from Ordnance Survey maps.

The restaurant re-opened in 2013 as Eat & Go, while the forecourt became branded Murco with a shop branded SPAR. The restaurant closed after a large fire on 10 July 2017. It reopened again some time later.

The forecourt and restaurant permanently closed in autumn 2021, with the site being stripped of all Murco branding and the entry being closed. The land was reclaimed by the owners of the surrounding Fonthill Estate, who said they had been considering options for developing a new service area on the A303.

The site partially reopened in April 2022 with Sol Bakery & Café taking over the former restaurant. The owners of Sol Bakery added a large glass window to the seating area so that customers can watch produce being prepared on site in what was described as a 'theatre kitchen', as well as providing a new dedicated dog walking field at the top of the car park.

Despite the new lease of life, the owners of the Fonthill Estate argued that the existing building was in need of significant investment and in summer 2022 submitted plans to redevelop the forecourt into an electric vehicle charging hub. Their plans include demolishing the existing buildings and erecting a new electric forecourt with 24 high-powered chargers and parking for 60 cars.

The new site will also feature a new amenity building with a large self-service cafe, leased out to the current occupants Sol Bakery, with large indoor and outdoor seating areas available and the 'theatre kitchen' experience retained. A shop and bakery offering locally sourced produce will also be included, along with toilet facilities.

A new public footpath will also be created from the service area to the nearby Chicklade village, to allow residents to walk to the facilities. The new building will have an unusual design, as it attempts to blend in with the surrounding hill. The entire site will use low-polluting lighting to reduce its impact on the Cranbourne Chase AONB.

The project has been called a mixture of 'Chicklade' and 'Bockerly'. A planning decision is expected to be made in early 2023, with construction due to commence in late 2023 if successful.