Harry Ramsden's made a return to the motorway network in December 2013 when Welcome Break opened one at Woodall southbound. Since then, Welcome Break announced they would be removing all of their restaurants, and replacing them with Harry Ramsden's franchises. These are operated under a contract which expires in 2023.

Depending on the space available, Harry's was normally joined by Starbucks, Subway and formerly Tossed. Among this line-up, Harry Ramsden's acted as the main restaurant option, and before 11am it offered an extensive breakfast menu with the option of buying rolls as takeaway. Welcome Break had commented that after breakfasts, their most popular meal was fish and chips, making Harry Ramsden's a suitable restaurant brand.

During 2017, the Fleet branch was destroyed in a fire, so Harry Ramsden's supplied a van from which their food could be served.

In line with most service station franchises, Welcome Break suspended their Harry Ramsden's offering on 21 March 2020, in response to COVID-19. In June 2020, most Harry Ramsden's units began to be changed to The Good Breakfast. While a few branches did later reopen, most didn't follow until October 2020. This reopening was unfortunately short-lived, as the second lockdown caused them to close again on 5 November 2020. 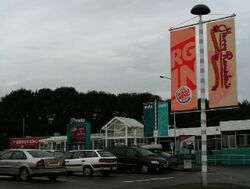 An advert for Harry Ramsden's at a Moto service area.

Two Harry Ramsden's waitress restaurants were opened at Granada services in 1995/96: Hilton Park and in the hotel adjoining Exeter. They were described as a new brand trial and the Hilton Park one was initially described as being very successful, and Granada were open to rolling it out to more sites. They also trialled it inside Little Chefs, but decided Burger King would be a better fit in such a small space.

In 1999, Granada agreed to operate franchised Harry Ramsden's kiosks in a £20million deal. They later purchased the entire chain and introduced a Harry Ramsden's restaurant to most of their services.

Granada introduced the pager system seen at busy restaurants to their services, so that customers could spend time in their shopping areas while waiting for their food to be prepared.

After Granada merged with Compass, they suggested Harry Ramsden's operate alongside Little Chef, in a format called Little Chef Choices. This was withdrawn in 2004 with Harry Ramsden's commenting that it was diluting the identity of both brands.

By 2005, Moto were starting to remove Harry Ramsden's from their services, in favour of other franchises. Harry Ramsden's later said they wanted to be recognised as a restaurant in their own right, and not as part of a larger chain. The Exeter branch lasted until 2013, long after the other motorway sites had closed.

An average meal at a service station Harry Ramsden's in 2005 costed nearly £8, drawing criticism at the time.

Harry Ramsden's operates at some Welcome Break services. These are: [view on a map -  Download KMLrefine search]

Harry Ramsden's has been removed from the following service areas: