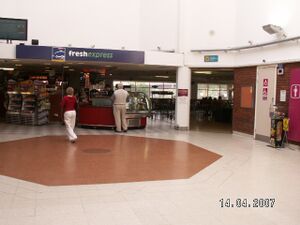 Fresh Express was Moto's first own brand restaurant name. It was designed to work alongside other eateries, and was created by BDG McColl for Granada in 1996, as part of their plan to shake-up their catering options.

Until then, motorway dining had generally been based around one option, such as Country Kitchen. Having just acquired a whole host of new brands, Granada wanted to introduce a food court to their services, offering the likes of Little Chef, Harry Ramsden's and Burger King. Fresh Express existed to fill any remaining gaps in that offer, by providing a number of simple, quick meals. Product ranges included 'Special Selection' and 'Fare Deal'.

None of these new restaurant options featured the Granada name, which was one of many steps they took to try to refresh the image of motorway catering. It may have worked for a while, but Fresh Express was managed directly by Granada and quickly came under criticism. Critics called for the state of Fresh Express to be investigated "as a matter of urgency" while Granada argued they couldn't invest fully in their catering because of the restrictions placed on their industry. 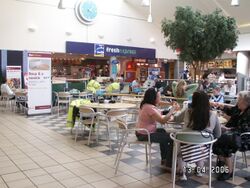 In 1999 Granada looked at branding their petrol stations 'Fresh Express', to promote the food offer. Café Nescafé would have been provided inside. They wanted to build outdoor 'takeaway and retail' buildings at Saltash and Markfield, which would probably have carried Fresh Express.

After Granada became Moto, many Little Chefs and Harry Ramsden's closed, but Caffè Ritazza was introduced to all restaurants. Often this was just a counter within the existing Fresh Express servery. A 'pick and mix' facility for children and a refund guarantee for dissatisfied customers were introduced.

At some older services there wasn't enough space to fully embrace the food court idea, so Fresh Express existed as a stand-alone restaurant in its own right, with a servery and a dining area. Ritazza would go on to become more prominently advertised.

The first Fresh Express logo used a cursive font, with a chequered sign. This was quickly replaced by the plate on wheels, which was removed in 2007. As a legacy of a previous idea, some services just had an area named "Restaurant". This continued the food court idea and had a Fresh Express-branded offer within it, but it wasn't very prominent.

In 2008 Fresh Express became EDC, under a very low-budget re-brand. Some Fresh Express furniture and vinyls remained in place until long afterwards.

Fresh Express used to be found at: