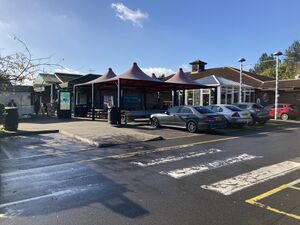 Pease Pottage grew from being a small service area to a large shopping area, and the biggest between London and Brighton.

Prices are paid using PayByPhone. The location code is 2455. 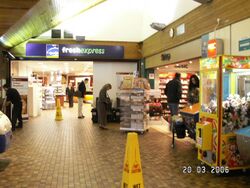 The service area was built by Welcome Break and opened on 26 May 1988. When Granada were forced to sell Welcome Break's motorway services, they were able to make the point that it wasn't a motorway service area, allowing them to keep it. As a result Pease Pottage went on to be branded Granada, and now Moto. The land was sold to BAE Systems Pension Fund in January 2011, for £8.85m.

Significant damage was done to the service area in a robbery which took place in November 1993.

Moto are currently building an electric vehicle charging hub here which will include 8 Tesla Superchargers and 12 GRIDSERVE charging points.

Consideration was given to providing the M23 with a service area at Shipley Bridge near Gatwick. Government policy later said that the M23 was too short to need any service areas.

Forte's branches of Little Chefs offered them good coverage of the road network, but many of these were having to close due to road improvements. This seemed likely to affect their branches along the A23, so they were keen to get in early with a new facility which would allow them to keep their stronghold on the road.

The Pease Pottage plan was registered in 1986, and was clearly going to be larger than a typical Little Chef. It opened in 1988 under Forte's Welcome Break brand. It was built on the remaining section of a piece of land called Whalebone Wood, most of which had been destroyed when the motorway junction was built. 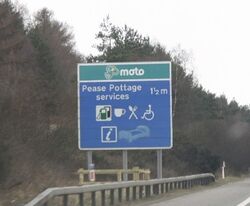 The badly-covered up bed symbol.

At the time Pease Pottage was built, the planning of motorway services was strictly regulated. Forte designed Pease Pottage on the basis that it would cater for the A23 only, which meant it would face a much easier examination. As soon as it opened Forte began arguing that signs should be placed on the motorway anyway, and while the Department for Transport tried to argue this wasn't correct and wouldn't be necessary, to maintain good relations they eventually agreed in 1994 to placing a few signs. More signs have since been added, and now nobody in government circles would know that Pease Pottage was never supposed to be signed from the motorway.

There were a number of minor quirks with the road signs used which, all together, paint a chaotic picture that fits this place's unusual background. Firstly, the road signs on Brighton Road were in black-on-white, which at the time meant "local facility". These were changed to the correct blue in 2010, and then, following the roundabout works in 2019, there are now a mixture of colours.

On the motorway, the label "Pease Pottage services" was often stuck on to existing signs as an afterthought. Other signs were placed in the wrong order, or with sections missing. There is still a sign at ½ mile which isn't needed according to the regulations and doesn't have any arrows or much information.

On the main advance sign, an error was made and a bed symbol was included. There was an attempt to remove it that didn't really work. In 2011, the sign was replaced and a new bed symbol was added, even though this place still had never had a hotel. Signs with symbols were all replaced in 2015.

The sign three miles before the service area had its reference to 'Moto' changed to "Moto GU221" in around 2003. Nobody - not even Moto or the Highways Agency - knew what this meant, and in 2005 it was covered up. It had probably been added without permission as a joke.

Given its history, it's not surprising that Pease Pottage came to be regarded as the smallest motorway service area in the country. Under Welcome Break it had only The Granary and The Shop (with toilets in the third corner), as well as their usual forecourt partner, Shell.

The lack of size was especially remarkable given that for 15 years, the next service area to the north was 100 miles away at Toddington.

The shop was later switched to Granada branding, and is now branded WHSmith. Granada made space for Burger King in 1996, with a seating area, game arcade and more toilets all in an extension. Moto changed the restaurant to Fresh Express and Caffè Ritazza; this pair then became EDC and Costa, with a large, new Costa stand in the dining area.

The big extension, built in 2007, added an M&S Simply Food, with a new entrance and space for a takeaway coffee stand. A second extension was planned in 2010 and would have moved the WHSmith to the entrance, making space for more seating. Instead a new, glazed, seating area was provided.

EDC later closed and was replaced by Greggs, as well as some takeaway units which were arranged outside. Space has been taken away from the car park, which was re-arranged and extended over the balancing pond.

A lack of space for parking and manoeuvring remains a problem. The tight entry junction was converted into a roundabout in 2020, to accommodate a neighbouring development.

From 1996 until 2005 there were plans to build Granada Lodges and Travelodges here.