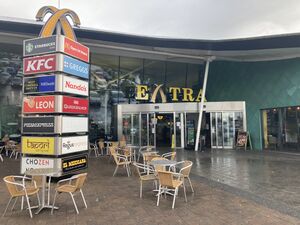 This is the Extra service area on the M25. For the service station on the A2 in Kent, see Cobham (A2). 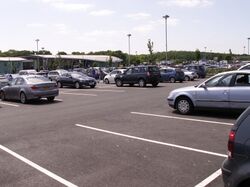 A small portion of the huge car park.

Official figures for customer levels at motorway service areas are always kept confidential, but an analysis of social media (and our own page views) suggests Cobham is the busiest. As part of their justification for building Colne Valley services, in June 2021 Welcome Break (who provide some facilities at Cobham) stated unequivocally that Cobham is the UK's busiest service area.

Cobham is also the UK's biggest service area. If you compare it with other official motorway service areas that cater for all vehicles, it is probably the biggest and busiest in Europe. Seeing as Extra has a policy of leasing out its units like a shopping centre, they don't get to keep all the profit that each franchise makes at Cobham, but they no doubt do very well out of it.

The service area consists of one very large amenity building and an equally large petrol station; even the forecourt is believed to be one of the largest in Britain. The site was built with facilities built to the south of the motorway, with an underpass allowing eastbound traffic to access it. Over 2,500 people a day use the petrol station alone.

The amenity building (signposted as a food court) is similar to most Extra services in that it has the main units spread out around a central atrium, with toilets at the back. The hotel is then connected at the side. A number of temporary-style units are placed in the middle, amongst the seating.

Extra currently hold planning permission to build a drive-thru coffee shop on site. The drive-thru will be a Welcome Break-operated Starbucks and is expected to be built in 2023.

At night, the coach park officially doubles-up as an overflow lorry park (this tends to happen at most services against their will, but Cobham is currently the only one to embrace this with official signage). In June 2019, work began to build a second HGV parking area with an additional 75 parking spaces, bringing the total to 147. There had been reports of some HGVs parking on the slip roads. One estimate suggested as many as 170 spaces are regularly required.

As a result of the HGV parking issues and the chaotic nature of the busy car park, long lengths of the roads around Cobham services are marked with double red lines - something rarely seen outside of major city centres.

With the choice of three HGV parking areas (the original, the overflow and the new one), trying to help motorists find their way out of the huge car park, and not to mention the confusing matter of explaining which side of the M25 goes where, a visit to Cobham can leave the motorist with a lot of information to take in.