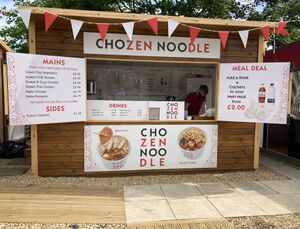 Chozen Noodle are a sushi and noodle restaurant which mainly operates from franchises in travel hubs. They became the first of what has become a surge of Asian-themed cuisine now available at motorway services.

The restaurants are positioned either in small dedicated small units, or in large buffet carts in the centre of the food court. At some service areas, Chozen Noodle uses the same serving area as Fresh Food Café, while at others, it takes over from The Breakfast Kitchen in the afternoons.

Following the launch of the brand in 2007, the first motorway sites opened at Extra service areas in 2012, and they then opened at Roadchef sites in 2014. Chozen Noodle was also integrated into the menu for the new Garden Square Deli units first introduced in late 2021 meaning Chozen Noodle products can be served without needing its own unit.

After the success of Chozen Noodle, their parent company worked with Moto to create Chow, which focuses more on Thai cuisine. Moto opened their first Chozen outlet at Stafford in 2022.

Chozen Noodle can be found at some Roadchef and Extra services. They are: [view on a map -  Download KMLrefine search]