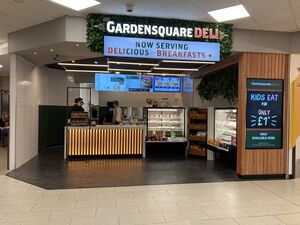 The Garden Square Deli is one of Roadchef's newest food brands.

It was created by Roadchef with a very small launch in March 2020, where the name was applied to a series of sandwiches which they sold in WHSmith and SPAR. They said that the theme was aiming to combine familiarity of an English garden with the vibrancy of a New York deli.

The brand went mainstream in the summer of 2021, where a number of Garden Square Deli-branded kiosks were opened up outside Roadchef service areas. These were part of a number of trials Roadchef were making as they sought to work around the British public's nervousness of dining during the pandemic, as well as creating new takeaway options that were able to handle the large influx of customers during the summer holidays.

This trial led to the opening of a few internal Garden Square Deli stores. Maintaining the original English garden theme, these small units sold not just the original sandwiches, but a wider range of breakfasts and lunches with items from the menu of Chozen Noodle (an existing Roadchef franchise) and New York Bakery.

Whereas Roadchef had previously begun working with flexible units, which change their brand depending on the time of day, The Garden Square Deli cannot have its theme changed, but it does update its menu throughout the day.

The external kiosks were repurposed in summer 2022 to sell New York Bakery Co.'s bagels only.

The Garden Square Deli operates at some Roadchef service areas. These are:

The Garden Square Deli used to operate at the following locations: