Roadchef's counterpart to the airy Stafford (North) services, this one comes complete with its own lake and fountain, with another series of facilities provided around an atrium.

Prices are paid using NexusPay or in the shop. The location code is 2214. 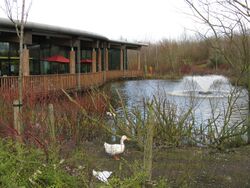 In Spring 2017, Transport Focus calculated a 70% satisfaction score for the services, making it the second-worst in the country. By 2018 this had shot up to 99%, making it second-best, while in 2019 it still stood proud in fourth place.

Stafford was the first service area to gain a Costa Coffee, as part of a trial beginning in 2000.

In the early 2000s there was a small store here called SOS Fashion.

Like all Roadchef services, the petrol station has been sold on, and is now owned by Euro Garages.

The service area was designed by Blue Boar but built by Roadchef, as the company was sold whilst the services were under construction.

In 1993 Granada were already planning the northbound service area, and at the same time they planned to open a southbound one directly opposite it. This was the Walton Heath Farm option, and had it worked out then the two services at Stafford would probably have opened at roughly the same time and looked very similar, just like any other dual-sided service station on the motorway network.

At the same time Stafford Borough Council received another planning application from Hallam Land Management on behalf of Blue Boar, positioned a mile to the south on North Pirehill Farm. The Granada proposal was preferred by the council, and planning permission was granted in spring 1994. The Blue Boar application was refused by the council but then subsequently allowed on appeal around June 1994. While both options now had planning permission, Highways Agency regulations meant that only one of them could be connected to the motorway.

By the end of that year, the Highways Agency had stated that their preferred option was the North Pirehill Farm proposal, and Blue Boar were subsequently awarded a signing agreement with Granada's proposal being rejected.

The original plans included rear access to the site via Pirehill Lane, a residential road which becomes an unpaved bridleway before it passes the North Pirehill Farm site and joins Green Lane in Whitgreave. There was strong local objection to such access causing heavy traffic in a residential area and to construction vehicles using roads deemed unsuitable. Because of this, along with new Highways Agency guidance that rear access was no longer a required condition, the revised plans that ended up going to appeal did not include it. The competing Granada application that had been approved by Stafford Borough Council included rear access via the B5026 Eccleshall Road in the same manner as their Stafford North counterpart.

Both options were deliberately set back from the M6 by 67 metres to allow for the motorway to be widened in future. As of 2019 this is now being built, but on a much smaller footprint than was expected in the 1990s.