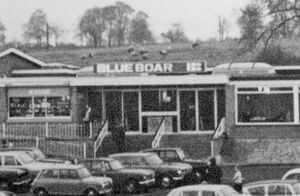 This is the former operator of Watford Gap services. For the services on the A45, see the page Mangrove services.

Blue Boar was a forecourt operator who went on to operate one of the oldest and most famous motorway services: Watford Gap on the M1. 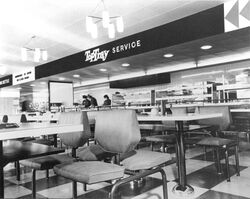 The TopTray restaurant at Watford Gap.

The company operated garages and forecourts across the Midlands, including close to Watford village on the A5. Local legend says that a blue boar lived close to one of their premises during the time of Robin Hood.

The business was family-owned until it was sold to managers in 1995.

When the A5 looked set to lose a lot of trade to the new M1 motorway, Blue Boar learned that a motorway service area was being planned close to their Watford depot, and made a competitive bid to operate it. Roadside repairs were expected to be an important aspect of running the new service area. The government were pleased to be able to say they were helping a local business impacted by the motorway, but in reality Blue Boar won the contract on their own merits.

Blue Boar generally focussed their efforts on Watford Gap, which had a number of teething issues related to its unexpected success. The financial pressure was reflected in their unsuccessful attempt to win Strensham. They won the contract to build a neighbouring site at Rothersthorpe, and in the 1990s later planned two more services.

On 30 July 1998 Blue Boar sold their business to Roadchef, as part of the latter's plans to enlarge their company and become 'the UK's fastest growing motorway services operator'. Roadchef have since refurbished all of Blue Boar's sites.

The ready-to-open Stafford was included in the sale. Blue Boar logos were covered up shortly before the official opening.

At its best, Watford Gap became popular and famous amongst travellers and party-goers, and was known as 'The Blue Boar'.

Despite its reputation at the time, Watford Gap was all about getting people back on the road as soon as possible. Their original proposal was all about the garage and showed little interest in the catering arrangements, which were mainly for lorry drivers. Its popularity stuck because the design was geared towards young men, who made up a significant portion of road users at the time, whereas Newport Pagnell was aimed at families.

Blue Boar were one of few firms at the time not interested in selling alcohol. The TopTray transport café they proposed for Watford Gap was too small (not helped by the small plot of land allocated to them) and caused them no-end of crowding problems from the start.

Until 1965 Watford Gap featured a waitress restaurant called TopGrill. This was scrapped in favour of a self-service one as Blue Boar quickly realised customers wanted to be served quickly. The next few services to open were very different to this, but since the 1970s the design has much more closely resembled Watford Gap.

One noted early money-saving trick was to serve hot drinks in disposable wax cups, which did not go down well the higher-class visitors.

In 1986, Which? visited Watford Gap and Rothersthorpe and concluded that Blue Boar were struggling to keep up with improvements by their competitors. They were the only operator to provide 24 hour shops.

After TopTray, Blue Boar branded their restaurants 'Pick-a-Platter'. This where the chevron-styled logo was introduced, instead of the one depicting a blue boar. Towards the end of their run, Blue Boar would have a restaurant called 'The Food Court' a Wimpy burger bar and a BP-branded forecourt. At Stafford, they were planning on having its name written in large lettering across the building.

The following motorway services were owned by Blue Boar: