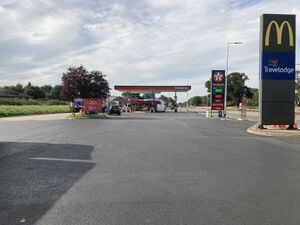 The Mangrove service area is next to the westbound side of the A45, but accessible in the other direction using a flyover. The flyover route is not suitable for HGVs, despite HGV parking spaces being available if you could get there.

First 2 hours free for all vehicles, after which all vehicles must pay £8 for up to 24 hours or £10 for overnight parking.

A small number of HGVs can be parked, but these spaces can only be accessed when travelling westbound. If travelling eastbound (or approaching from a local road), the entrance is too tight for HGVs.

Prices can be paid in the forecourt. 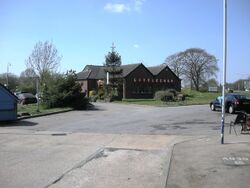 Maps show that the service area was developed between 1955 and 1962 as a garage named 'Blue Boar'. It was built between Bourton House and Blue Boar Cottage, with the Blue Boar Farm positioned on the opposite side of the road, and as a result the junction was known as 'Blue Boar Corner'.

That history sounds reasonable, but another source claims that there was a petrol station near Dunchurch named Blue Boar in the 1930s, which was named after a Blue Boar Inn on the A5. Wherever it came from, the Blue Boar owners did expand the business to include a number of filling stations and breakdown services, eventually taking on Watford Gap services.

At Mangrove, plans emerged to build a flyover at the dangerous Blue Boar Corner in the late 1960s. These plans referenced a "motorway-style" service station which would be built next to Bourton House. The house was demolished and the garage became a full petrol station, but no other facilities emerged until the Dunchurch branch of Little Chef opened in 1988.

The Little Chef closed on 22 August 2012, and was converted to a McDonald's Drive Thru shortly after.

Despite the exit still being known as the Blue Boar turn, the service area has been officially called 'Mangrove service station' for some time. Some sources say 'Dunchurch services'.