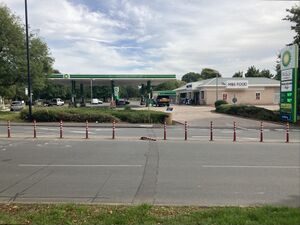 This service area is only signposted westbound, but it is accessible eastbound via the roundabout.

A petrol station and garage first opened here in the late 1950s, known as Midway Garage (though some records call it 'Highway Garage') and managed by S H Newsome & Co Ltd. Initially it had a temporary layout that may have been awaiting work on the Stonebridge Highway.

It had a refuelling area positioned close to the road, and a large, empty space at the back as this was where the borough boundary was. A lot of space was lost when the roundabout was upgraded in the 1970s.

By 1987 the site was under direct BP control. BP wanted to build a new filling station, a drive thru restaurant and a residential block here. This proposal was refused as it was considered to be too intensive a use of such a small space.

Instead BP were granted permission to build new petrol station, car wash, restaurant, 40-bed hotel and business facility in 1990. The restaurant and hotel didn't materialise, but a new, massively-sized petrol station was eventually constructed in 1999 as a BP/Safeway combination site, expanding into some of the land that was previously in the rural district council area.

Another attempt to add a restaurant to the site was submitted in 2000, but that plan was later withdrawn.

Following Morrisons' takeover of the Safeway supermarket in 2004, the petrol station was fully handed over to BP who later rebranded the Safeway convenience store to their new retail partner, M&S Simply Food along with their usual offering of Wild Bean Café.

bp installed 2 bp pulse electric vehicle charging points here in 2022 and these are expected to go live before the end of the year.

Despite this being a small site, it has full signage marking it as an official service area. These signs were placed by the Highways Agency, who maintained the road until 2003. The road is now the responsibility of Coventry City Council, who may not be aware that the signs (which have been outdated since 2015) are even there.