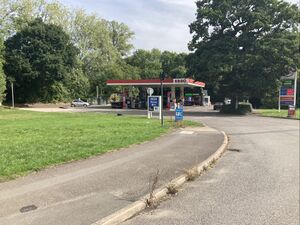 Another small petrol station on the A45 that is classed as a formal service area.

The Cedar Café and truckstop opened here in around 1956. It sold fuel and offered accommodation. It was built on the byway called Canley Ford.

The new petrol station was built with its entrance on the A45, and its exit leading to Canley Ford. This is interesting because Canley Ford is now so overgrown you cannot drive a vehicle down there, but the very end of the road still has to be maintained. As a result, anybody who tries to turn directly into Canley Ford from the A45 will find themselves stuck and entering the petrol station in the wrong direction. The byway is still open to pedestrians, but this wouldn't be a suitable place for its users to park.

Esso had remained in direct control of the filling station since opening. By the late 2000s the shop was Esso's regular Snack & Shop title with a Coffee Nation machine.

Esso's ROC sold the petrol station to Euro Garages in 2013. They opened a short-lived Subway kiosk within the shop in 2015 which closed about a year later.

The forecourt shop was rebranded from SPAR to Sainsbury's On the Go in summer 2020, and reverted back to SPAR in October 2021, before rebranding again to Asda On the Move in September 2022.

Despite this being a small site, it has full signage marking it as an official service area. These signs were placed by the Highways Agency, who maintained the road until 2003. It is now the responsibility of Coventry City Council, who may not be aware that the signs (which have been outdated since 2015) are even there.