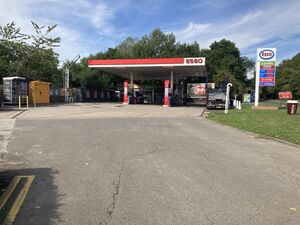 A45 westbound between the M42 and Coventry

A small westbound petrol station (and hot tub store) on the westbound A45 makes up this service area with a very generic name. 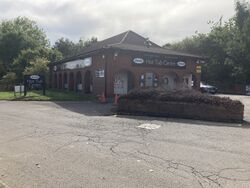 The former restaurant building is now a hot tub shop.

This by-pass was built in the late 1950s and the service station opened at the same time as a BP, known locally as Pickford Green Filling Station. It was later operated by Heron.

Plans for a 21-seat 'grill bar' and 12 parking spaces to join the filling station first emerged in 1965. The Allesley branch of Little ChefHistory eventually opened here in around 1967, and closed in around 1984. It was later operated by Supachef, which itself closed.

The Little Chef reopened in a new building in 1999 but closed within two years. That building became Mumbai Blue Indian Restaurant and is now a hot tub studio.

The petrol station was re-branded to Texaco in the 1980s, after which it became known as 'Oak service station'. It was then rebranded to Jet in 2010. The site was then purchased in 2016 by MRH who rebranded the site to Esso, adding their own-brand Hursts store to the site too.

Following the acquisition of MRH by MFG in 2018, the site transferred to their estate. MFG later rebranded the store to Londis in early 2021.

Despite this being a small site, it has full signage marking it as an official service area. These signs were placed by the Highways Agency, who maintained the road until 2003. It is now the responsibility of Coventry City Council, who may not be aware that the signs (which have been outdated since 2015) are even there.