The location where the new M42 J5A is planned.

Solihull could well be the location of Britain's next motorway service area. With over 50 years of planning debate behind it, it started out as one of the country's oldest!

The Planning Inspectorate granted outline planning permission for the proposal on 11 March 2022. While this means it's now closer to coming to fruition than it ever has been, given the long history, it feels a bit early to declare it all a done deal.

The approved location for the service area is Walford Hall Farm, historically known as the Catherine-de-Barnes option, although it has been suggested that Extra, the developer, will call it Solihull services.

The usual facilities will be provided including a large amenity building with a grass roof, a large lorry park, and a large petrol station. A footpath will connect it to Solihull Road. The adjacent building at Walford Hall Farm would have been brought into use as offices, requiring significant work as it is a listed building that is also derelict.

Detail on the new amenity building will become apparent in time, but you can expect a development similar to Leeds Skelton Lake. Extra have created a mini-site for the project.

What makes this development unusual is that access will be provided via M42 J5A, a new interchange that hasn't been built yet. The theory is that England's national highway authority were already planning to build two roundabouts and south-facing slip roads here as part of their A4545 project. They insist that the roundabouts were always the plan, although a few people have asked why they would have been needed if Highways England weren't trying to pre-empt the surrounding land being sold to developers.

In the event, Extra were willing to pay for the remaining slip roads, to allow people to enter and exit their service area. Had the planned A4545 been cancelled, Extra would have paid for M42 J5A to be built for their use anyway. This raises a new problem: Extra's north-facing slip roads would be very close to M42 J6, creating a layout that would be incompatible with the current 'part-time hard shoulder' road layout. Extra had suggested they would be willing to pay for the motorway layout to be changed to the current standards (and the government later made this their intention too), but the current government policy is that no changes to smart motorways are allowed before 2025. All of this means Solihull services can't possibly open before that date.

There have been further issues with the junction. In order to handle all the service area traffic, engineers declared that the brand new roundabouts would now need traffic lights and up to four lanes. This raises further questions about exactly what circumstances building two small roundabouts was ever deemed to be the optimum solution.

Issues with the junction are somewhat inevitable. This section of the M42 functions as a long-distance motorway, an urban commuter route and a development corridor, all at the same time, resulting in closely-spaced junctions, all of which are overloaded and positioned in leafy green belt areas on the urban fringe. The planning history is detailed below but, suffice to say, the Planning Inspectorate ruled that the drawbacks with building at M42 J5A were overruled by the benefits and that this location was better than the alternatives.

Despite this, residents have been vociferous in their objection to service areas here, having previously formed the group "Solihull Against Motorway Service Areas", and now nearly 800 people have signed an online petition saying they don't want the project to happen.

It's quite incredible that this ongoing proposal dates back to at least 1969.

The most recent developments began in 2014, when Extra went public with their Walford Hall plan. Inevitably this was badly received by its neighbours, so in 2016 Applegreen, who were keen to break into the British market, went public with a proposal for a service area at M42 J4. The two proposals would be debated together, which meant a very long wait, as there were several technical issues to be determined.

Both proposals were unanimously rejected by Solihull Metropolitan Council in 2021, with concerns raised about the loss of green belt land, and also about road safety on the M42. Some councillors weren't convinced that a new service area was needed. The Planning Inspectorate ruled in March 2022 that the Extra plan could be justified, but that the Applegreen proposal could not, even if it was the only option on the table. 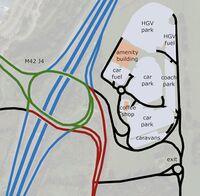 Applegreen's plan was designed to be discreet. It would be smaller than the Extra plan, and smaller than the previous plan at this junction. Access would have been provided directly from the roundabout, with an exit onto Gate Lane.

It was to be built on the eastern side of M42 J4, at Box Tree Farm. It had been suggested that this would be called "Shirley services".

A large grass roof would be provided, covering both the building at the petrol station. There would also be a drive thru coffee shop. After Applegreen acquired Welcome Break, it was decided that this would open as a Welcome Break service area.

Highways England had technical reservations about Applegreen's plan to integrate the site with the very busy roundabout at J4, which caused a lengthy delay to the planning process.

When the M42 here was being planned, there was going to be a service area called "Friday Lane". It would have been positioned on both sides of the motorway near Catherine-de-Barnes, and the proposal prompted complaints from residents. In 1971 and 1973 it was discussed in the press, and described as being about 60 acres in size. Complaints were mainly attributed to people from Hampton in Arden.

When the M42 opened in 1976 there was no evidence of a service area having been planned here. In 1978, the Department of Transport confirmed that they were now planning to build a service area a few miles to the north of here. Called Black Firs, it would be positioned between J6 and J7, and the announcement confirmed that Friday Lane had been cancelled.

Black Firs had its land built on, and we then entered a period where motorway service area development across England ground to a halt, as the Department of Transport was occupied with other issues. In the mid-1980s, they encouraged developers to fulfil two deliberately vague contracts, which were named "M42 Northern Section" and "M42 Southern Section". The northern contract successfully led to the opening of Tamworth services in 1990, but this would be no use to traffic leaving the M42 for the M6. 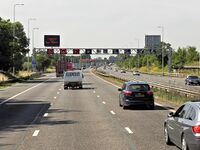 The Active Traffic Management system on the M42 that wasn't compatible with the plans.

In 1992, the responsibility for planning motorway service areas was moved from the government to the private sector, without the southern contract having ever been fulfilled.

The following year Blue Boar proposed building a service area at Walford Hall Farm (what's now the Extra site), which they hoped to have open by 1997. It would have involved building a new flyover to provide access to the M42. This would have been the M42's southern service area, as Hopwood Park didn't open until 1999, but the Walford Hall plan got stuck in the planning system.

These three proposals were all taken to a public inquiry in 1999, where they were opposed by residents who formed the Say No Action Group (SNAG). In 2001, the Secretary of State refused permission for the Shirley Estates and Extra plans for being inappropriate development in the green belt, but was "minded to give permission" to the Blue Boar/Walford Hall plan. This permission was never given, but it did set a precedent that a new motorway service area was needed.

In 2001, Shirley Estates submitted an updated version of their scheme. This would have been positioned further from Stratford Road. Another big change was that Extra confirmed that they had permission from Blue Boar to pursue the Walford Hall Farm proposal. Blue Boar had been taken over by Roadchef in 1998, so it's not clear exactly when that permission was granted, or whether Roadchef had actually been representing the scheme during that first inquiry.

John Prescott reopened the inquiry in 2005, saying circumstances had changed. The main change was that in 2006 the new Active Traffic Management system (the forerunner to what's now called a "smart motorway") was going to open. The new inquiry refused the new Shirley Estates plan, and also refused the outstanding Walford Hall Farm plan on the basis that it wasn't compatible with the new layout for the M42. The schemes were opposed by residents who formed the Solihull Against Motorway Service Areas Group (SAMSAG).

Unfortunately for Extra those perceived safety risks were only an issue there and then. A few years later smart motorways would happily be built around frequent exits and service areas with no concerns raised. At the time the 'smart motorway' was still a novel concept that even highway officials were unsure of, so they didn't want to make things any riskier.

Some may have expected the rejection of all three options in 2009 to draw a line under the matter. Things were soon kicked back into action when the Highways Agency published a list of gaps between motorway service areas in 2010. The gap on the M42 (specifically between Warwick and Hilton Park) was highlighted by them as the most urgent issue that needed resolving.

In 2014, Extra presented two options which could be built at Walford Hall Farm. The design was updated to reflect new ways of thinking, with additions such as the green roof. That scheme would, eventually, be granted planning permission in 2022.