Regular road users will know Hilton Park as the first service area after the madness of the West Midlands. It's still squashed between junctions on a very busy section of the M6.

Prices are paid using PayByPhone. The location code is 2443 (northbound) and 2444 (southbound). 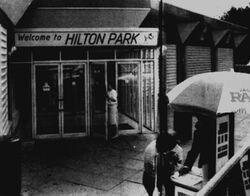 The entrance to the service area, pictured in 1991.

Hilton Park features a large tower structure which used by Top Rank to house a restaurant. It closed and has been empty since the 1980s.

It became the UK's busiest service area, and was an obvious target when Granada wanted to add retail units to the front of their service areas. These units have changed brands many times over the years, including being used as a Trucker's Lounge and Moto's first KFC. They are mostly closed now, though one is used by the Central Motorway Policing Group.

The southbound service area has a picnic area far from the main building, with its own car park, which most people miss because they're looking for the main facilities. It is a legacy feature of some older service areas and only actually has one table left. Most of the parking spaces have now been turned into a Tesla charging area.