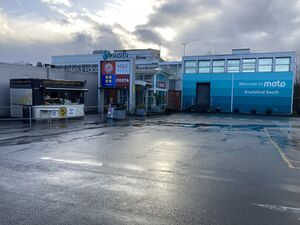 Knutsford is an old building which has an unusual take on the bridge idea.

There is very little parking provided for HGVs here. Some road signs say HGVs are not permitted to park here; confusingly, some of those have now been taken down while some of the signs remain up. Regardless, in the northbound HGV park, there is a sign saying that the area is for "HGVs only", and that lorries should continue on to Lymm Truckstop.

First 2 hours free for all vehicles, after which cars must pay £16 and HGVs, caravans and motorhomes £29. HGVs can pay £32 to include a £10 food voucher, but HGVs are asked to only park here in an emergency.

Prices are paid using PayByPhone. The location code is 2446 (northbound) and 2447 (southbound). 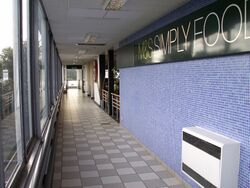 M&S on the bridge, where there would have once been a waitress restaurant.

The stand-up comedy show 'Rhod Gilbert and the Award-Winning Mince Pie' is based entirely on his experience here, although he talks about service stations in general.

The northbound side has two female toilet blocks: an older one underneath the bridge and a newer one by the hotel.

Moto opened their fourth M&S Simply Food store here on 9 December 2004, occupying some of the large restaurant space. The rest of the restaurant was later shrunk down to make way for Greggs and Costa units before eventually closing in the late 2010s. Together with the M&S, these 3 units now make up the bridge-based food court.

A Costa Drive Thru opened on the northbound side in Spring 2019. A southbound one was due to join its counterpart but the plans were later withdrawn.

Moto intend to add a KFC restaurant and Pret A Manger store here in 2023.

The Rear Access here leads on to the classified road A5033, and has been known to be used to divert traffic off the M6.