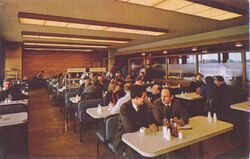 Work to design Knutsford services started before the previous motorway services were open. It had been hoped that Knutsford could wait long enough to collect feedback from Watford Gap and Newport Pagnell, but the priority was to have it open with the motorway, so everybody involved had to assume that the previous examples were working well. The full history is explored here.

The process to invite firms to bid to run the services was started a few weeks after Farthing Corner. It was then postponed because it was thought some firms weren't able to deal with both at the same time. A number of replies were received, and they were analysed by their rent offer, fuel offer, catering offer, traffic flow, landscaping and company stability.

Kenning Motor Group had started working on a bid for Knutsford, but they decided not to submit it.

Motorway Services Ltd, who won the contract for the adjacent service areas at Keele and Charnock Richard, also bid for Knutsford. Their design work, described as "simple and fairly conventional", was once again of a very high quality, but their financial plan assumed high levels of trade and handing them a monopoly of all the M6 services at the time was not desirable.

Their design had a snack bar and transport café on each side of the motorway with a footbridge in between. It received a very good review, with inspectors writing it "continue to show a complete understanding of the type of services required and the essentials of planing", even if the buildings were very close to the motorway.

"They do not inspire the confidence needed."
Ministry of Transport, 1961

Airborne Catering Ltd made a bid with an impressive financial offer, but again the Ministry didn't believe their figures were honest. It's thought their strategy was to agree to a level of rent at a level they'd never be profitable enough to pay. Airborne Catering, who provided catering at Gatwick, would have had fuel sales managed by Regent, but they were rumoured to be close to pull out of the deal. Their building was themed around an unattractive aircraft hangar. They wanted a restaurant, café and transport café on one side of motorway, and a transport café only on the other.

Airborne's plan was summarised with the line "a continued lack of attention of the submission of essential details". One particular criticism was that the building didn't overlook the parkland but overlooked the lorry park.

Their architect was Sydney Clough, Son & Partners, who also worked for Top Rank.

Airborne would have chosen a new brand name to use, had they won the contract.

Oliver Hart would contract catering out to Robley Ltd, who had a respected service at Liverpool Airport. The furniture would have been plastic.

W. Blamire's design had a restaurant and transport café on each side of the motorway.

A drawing of Top Rank's plan.

Rank's design wasn't as good as Motorway Services Ltd's, but it was "rather more imaginative" and showed "expert knowledge of the equipment required". They had a restaurant and snack bar on the bridge and a transport café on each side. They won the contract, and a rule was introduced that no operator can bid for adjacent sites.

Their architect was Sydney Clough, Son & Partners. Rank spent £162,000 on the project.

"Appalling and rather tatty"
1978 formal inspection

In 1966 Rank admitted that they regretted their ambitious bid, as Knutsford was struggling to break even. When the site reached full capacity, Rank refused to make it any bigger, as the turnover-based rent they had agreed to meant that any investment would mean they'd have to pay more rent. As a result, Sandbach was soon built, although Rank did then agree to extend Knutsford.

The transport café was changed a general purpose one, with a new commercial drivers area shoehorned in the corner. The new bridge-café had bright orange and yellow furnishings, while the restaurant had an open-kitchen and plastic seats.

The service area employed a Lyons ice cream trailer which moved between the two sides. It also trialled a trolley service in the car park but it made little money. Rank wanted to add a takeaway unit, which eventually arrived in the form of Wimpy Express.

The amenity building had to be washed down every few years as it weathered quickly. Rank also had to deal with theft from around the building: one of the outdoor menus turned up at a local golf course.

Egon Ronay's opinion of the services was somewhat split. In 1974 he was quite positive about it, and in 1977 he rated the restaurant as "acceptable". However, in 1977 the café was rated as "appalling". He called the café "a loud, garish place" and called the atmosphere "that of a lower-class transport café". The food, "arranged with no idea of presentation" included a mixed grill which was "scandalous". The restaurant on the other hand was "quite enterprising". He was also critical of the noisy jukebox and the smelly toilets.

A 1978 government review described the services as "appalling and rather tatty". As profits began to increase, a £1million refurbishment was carried out in 1982. 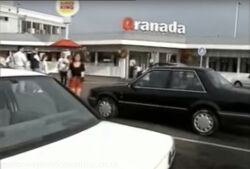 Granada signage at the entrance to Knutsford in 1997, before the car park moved.

Today, the layout within the services is very odd. The Travelodge reception is actually inside the main amenities building, at the back. Whilst the gents toilets are at the back, the ladies and disabled are at the far back (there appears to be another toilet block next to the gents which is fenced off). Originally the entire service station was built on the bridge, with just steps on each side and snack bars serving food underneath.

Several applications for a Travelodge on both sides of the services were previously rejected as the land is green belt and at the time of the first application (1994) there were few other lodges at service areas and the Highways Agency believed they might be misused. The area by the north-east side of the service area has been left clear to allow for an expansion.

On the southbound side, an extension was built in the 1970s, creating a large, bland, grey wall. After the car parks were swapped, this became the main entrance. This was eventually wrapped in bright green colours. Inside, Pavilion provided the restaurant servery with bright red and white tiles, brown tiled flooring, and green and red fittings.

Although there is now an M&S on the bridge, the majority of it is again dedicated to catering, including (unusually for Moto), the Greggs.

In terms of road layout, Knutsford's 1960s engineering standards have left a lot to be desired. All four slip roads are extremely short, but the two at the north end can't be extended because of the bridge. The northbound exit from the service area was made marginally longer in 2019; it still joins the road almost immediately.

In addition, the motorway's engineers weren't worried about how close J19 is to the north of Knutsford. The road signs for the two now overlap, causing some confusion. 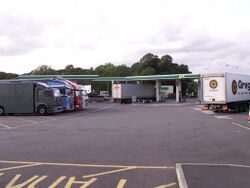 Some HGV parking is available but not advertised.

In the 1990s part of the car park was used by a pallet business, which Granada were able to force out in 1999, commenting that they needed the space.

In August 2000, Granada reached a formal agreement with the Highways Agency to encourage lorries which had been stopping at Knutsford to use their new acquisition at Lymm instead, because it is much larger and has more secure facilities.

At around this time, Granada changed the layout at Knutsford. Until then both sides had HGV parking nearest the entrance and the car parking nearest the exit. The change resulted in a much smaller lorry park. Despite all the 'no lorries' signs, there are still some spaces for lorries available, but they are signposted 'emergency parking only'. A distance of 14 miles is then given to Lymm, which is more than double the actual distance.

The Highways Agency listed Knutsford in their approved truckstop guide, despite it only having 27 HGV spaces. While that's not many for a busy motorway, it's still more than one might have expected given that HGVs were supposed to be banned.

For a short while the parking prices came with an unusual (and expensive) tier system with five different lengths of stay available (24 hours cost £35). This has now been replaced by the standard '2 or 24 hours' system.

In 2013, the 'no lorries' signs which had been provided on the approach to Knutsford were taken down. Confusingly, in 2018, new signs were placed elsewhere on the M6 to tell lorries that they can't park at Knutsford. The confusing truth is that they are welcome but may struggle to find a space, which is a situation lorry drivers will find all along the M6 anyway.

In 1986, the latest in a series of plans emerged to replace the A556 with a new motorway, including new flyovers at M6 J19. The Department of Transport acknowledged that this would require Knutsford to be demolished.

In January 1990, the Department of Transport confirmed that a search for a new location for Knutsford services had begun. The new location was soon found at Cann Lane (north of J19), and the Department of Transport advised that they were expecting Top Rank to operate it. In 1992 the government ceased all involvement in service station development; they said they had completed "preliminary work" at Cann Lane, but any developer would be free to take over the project.

Soon additional plans emerged to widen the M6, which also required the service area to be demolished. While the A556 motorway was continually postponed, it seemed likely that some-sort of change would soon be made to M6 J19. One plan, dated 1994, had new slip roads wrap around the service area, running from the M6 south of here to an upgraded Northwich Road. Pavilion wanted to use it as an opportunity to re-landscape a lot of the services, and to build a large lorry park.

The chance to replace Knutsford was seen as a good thing, as it was old and overcrowded. Its location is too close to J19, and the northbound exit onto the motorway is too short.

In the event, none of these road improvements happened as planned. The new A556 opened in 2017, the M6 widening was finished in 2019 and work started on J19 in 2020. All of these improvements were carried out without moving or changing the access to Knutsford services.