Unbuilt Services On The M6

For a list of current service areas on the M6, see Services on the M6.

The M6 was built in stages over the course of 50 years, but the plan was pretty clear from the start.

From the start near Rugby to the end near Carlisle, a plan was put together to have service areas at broadly 12 mile intervals.

This plan was: Junction numbers refer to the situation upon opening.

MOT Numbers have been provided where they are known. They were allocated as the road was planned, which explains the way they appear to jump around. The more recent ones were allocated much larger plots of land.

As with other motorways, the policy was that every-other site would be built straight away, while the rest would be held in reserve. Sandbach was the only one which had been held in reserve and was eventually built - all of the other sites identified remain unused, for reasons we will examine further on.

Motorway services in Scotland are arranged locally, so they would never appear on the English Ministry of Transport's plans, even when the M6 was intended to cross into Scotland.

When the potential sites of the early motorway service areas were examined, several possible locations would be considered. We tend to gloss over this, because it's hardly remarkable.

What's unusual about Essington is that it's the only example from this era where the government became fully committed to the idea - before deciding to abandon it and develop Hilton Park instead. Many resources became confused by this and recorded both locations, including the official service station numbering system, even though there was never a plan to build them both.

The site at Essington which had been identified was about one mile south of Hilton Park, next to Red Lane, which would have been diverted over the M6 to provide access to the service area. The project was abandoned before potential internal layouts could be drawn up, but plenty of rough outlines were produced.

The Essington site was very unpopular with the Ministry. It was too small, the changes to Red Lane would be costly, and the area was "unattractive". The Staffordshire County Planning Committee and Local Planning Authority both objected to the services, and the National Coal Board were proposing to commence opencast operations here.

Despite claims that there was no other suitable site, Sir Owen Williams identified Hilton Park as a potential alternative. 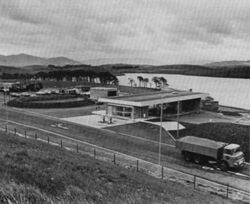 The tiny site at Killington Lake, upon opening.

As the M6 passed through rural Lancashire and Cumbria, there was a problem.

Motorway services would still need to be provided at regular intervals to allow drivers to take breaks and refuel. Some engineers argued that having suitable places to stop would be more important than ever, as drivers may be distracted by some of the stunning scenery.

However, traffic levels across here would be much lower than on the rest of the major motorway network. It would be difficult to encourage any operator to invest in a service area here. There were also environmental issues to be considered.

A solution was eventually found by having a series of much smaller service areas, positioned on alternating sides of the road. That way very little investment was required, but there would be the potential to expand them when traffic levels picked up. This gave us:

The earliest plans had Southwaite being held in reserve.

As a result of these additional issues, these service areas opened around two years after the motorway. Special signs were placed on approaches to the M6 warning joining traffic that there would be nowhere to stop. By the 1980s custom levels had caught up enough to provide a normal service, but this section of the road is still noticeable quieter than other major motorways.

In 1991, the Department of Transport registered a potential new service area at Cann Lane. The idea was that if Knutsford had to be demolished because of roadworks - which seemed likely and was perceived as a good thing as Knutsford was so outdated - Top Rank would be allowed to build a "new Knutsford" to the north of J19.

In 1992 the Department of Transport announced that they were ceasing all involvement in service area development. They said they had done "preliminary work" at Cann Lane, but were expecting the private sector to finish the job.

HGV parking has proven to be a major problem on the M6. Three truckstops were developed in the 1980s, and these were eventually able to secure an agreement to place road signs on the M6. These are:

Several commercial developments have been developed privately at junctions next to the M6, but never arranged for road signs to be placed on the motorway. One of these, at Tickled Trout, is actually older than the motorway.

There are examples of sites reserved for new service areas all along the M6, which haven't been used and are now in varying conditions. These sites can all be matched up with the map above.

The start of the slip roads intended for Harborough Magna services.

The site identified at Harborough Magna (SA24; J1-2) was a huge 16 acres. The adjacent site at Corley was equally large, which goes some way to explaining why Harborough Magna was never needed.

It had four ghost slips, each of which was marked out as a full exit. The two which faced east look like they had been used to access Old Montilo Lane regularly until recently. The fields were purchased, prepared and a footbridge (with no steps up to it) was built for the eventual developer to use.

Before the location of this reserve service area had been identified, another site was considered at Stretton-under-Fosse. It would have required considerable earthworks to bring it into use. The name Stretton-under-Fosse continued to be used by locals to refer to the chosen reserve site, although the Department of Transport stuck with 'Harborough Magna'.

In 1995 the Department of Transport announced that they were planning to sell the unused land. The ageing footbridge was removed in 2004.

Doxey services (SA6; J14-15) was planned much earlier, and its site is comparatively tiny. It totalled 10 acres, with 2 acres allocated to a maintenance compound.

The maintenance compound was built and revealed that the slip roads in and out of this service area were going to be short and sharp. Rear access was provided onto Aston Bank, but it would have had to have been removed had a service area been built.

The Ministry of Transport initially wanted to keep the land available for a future service area. The northbound side was eventually turned into a HGV checkpoint and police depot, while the southbound side has been used as project offices for various roadworks. Each side is signposted as "works unit only", attracting a degree of intrigue: nonsense internet rumours have claimed all sorts of conspiracies are happening there.

When it was finally decided that the M6 did need a new service area in the early 1990s, Doxey was immediately ruled out because it is so constrained by modern standards. The entrance to the site now has signs warning HGVs that they risk tipping over on the sharp bend, which would have been a novel feature for a service station. 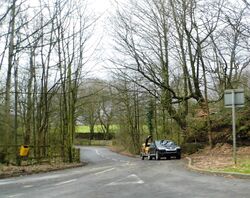 The turning into Newton-le-Willows from Rob Lane.

Newton-le-Willows (SA10; J22-23) suffers from the same problem as Doxey: it was designed to the standards of 1963, and it soon became clear that these wouldn't be suitable.

The site is very close to J23, it has short slip roads, it's far too small, and shortly after it was placed on the reserve list, a school was built right next to it.

At Newton-le-Willows the land was purchased, and the main road through the service area was built, which provided rear access onto Rob Lane. A maintenance compound was built on the southbound side, which has since developed into a full National Highways regional control centre. The main part of the land isn't used.

The northbound side is used for agriculture, and the exit is only used by police and works vehicles needing to turn around.

In 1990 the Department of Transport confirmed that they didn't see this as a suitable site for a service area, having learned lessons from the problems at Knutsford. In 1995 they announced that they were going to be selling the unused land.

This site is widely referred to as "Haydock Park", and sometimes "Rob Lane", but documentation from the time used the more continental "Newton-le-Willows" (usually without the hyphens).

The M6 roughly between J29 and J32 was the first motorway to open in the country. At the time, there was no such thing as a motorway service area. It stands to reason that no plan was made for Broughton services then. Yet references to it frequently crop up.

It seems that in around 1962, land was purchased for a service area at Broughton, "next to the Preston-Lancaster motorway". This suggests it was tied in to the planning of the M6 north from J32, which opened in 1965. The distance south to Charnock Richard was measured at 13 miles, fitting the pattern discussed at the top of the page. This would place the site immediately south of D'Urton Lane.

They then stated that the idea stemmed from land left over from the construction of the original motorway. Apparently the layout of M6 J32 was changed, bringing it very close to the service area, and moving it either south or west was considered. Whatever happened, considerable earthworks would have been needed to develop the site, and strong objections were expected.

There was then a debate about whether this would be a suitable place for a maintenance compound. The fall-out from that appeared to kill any desire to build a full service area here. There also wasn't much of a case for it: by modern standards Broughton was always going to be too small and too close to J32.

The large site available at Forton services further took away the need for any more service areas. In fact one potential developer at Forton was accused of "trying to push Broughton out" with their large restaurant.

If there was any evidence to be found, the widening of the M6 and construction of the neighbouring industrial estate would have taken it away.

Clifton services (SA41; J39-40) is a little less mysterious, but still doesn't quite fit in with the other unused sites discussed so far.

As with the other service areas in Cumbria (see The Shap Shake), Clifton was expected to receive extremely low traffic levels. Some documents described it as being "southbound only", which would fit the pattern. Ghost slips were provided for the southbound side only.

The service area would have been twice as big as the village of Clifton, which is right next to it. Planners were therefore surprised to discover the residents, some of whom would have backed on to the service area, were rather indifferent about the idea. One Ministry of Transport source suggests that land was purchased from Lord Lonsdale to make space for the southbound service area. Plans were made to provide a police post here.

The slow growth of traffic at other Cumbria service areas prevented Clifton ever taking off.

Some sources refer to the site as Melkinthorpe services, but the Ministry of Transport consistently called it "Clifton". 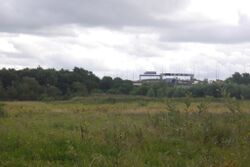 The site where Woolston services was planned.

Under the 'Cheshire 2011' local plan (dated 1995), policy T20 allowed for a new service area in the Warrington area, which encouraged development in that area. Stafford had a similar policy.

Some of the new motorway services once planned for the M6 we have uncovered include: